The attack focused on ISIL camps, training sites and weapons storage areas in Libya, where militants have thrived amid chaos. 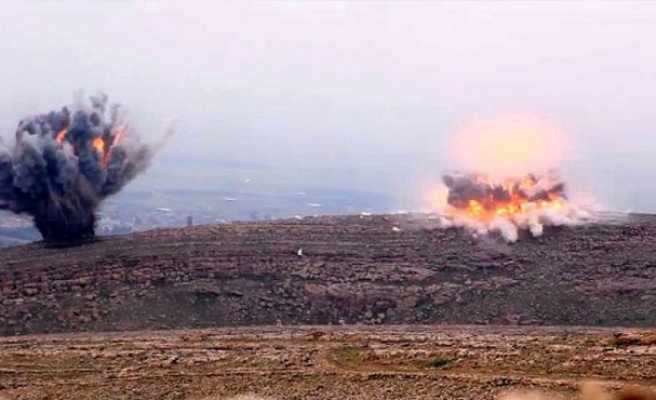 Egypt's air force bombed ISIL targets inside Libya on Monday, a day after the group released a video appearing to show the beheading of 21 Egyptians there.

It was the first time Egypt confirmed launching air strikes against the group in neighbouring Libya, suggesting President Abdel Fattah al-Sisi is ready to escalate his battle against militants.

The military said the dawn strike, in which Libya's air force also participated, hit ISIL camps, training sites and weapons storage areas in Libya, where a civil conflict has plunged the country into near anarchy.

"The strike achieved its targets accurately" and the pilots returned to base safely, the Egyptian military said, as state television ran brief footage of a fighter plane taking off in darkness.

The 21 Egyptian Coptic Christians, who had gone to Libya in search of jobs, were marched to a beach, forced to kneel and then beheaded, according to the video, broadcast via a website that supports Islamic State.

In a phone call to Al Arabiya television, Brigadier Saqer al-Joroushi, the commander of the air force loyal to Libya's official government, said Libya had coordinated and joined Egypt in the strikes in the eastern city of Derna.

"More air strikes will be carried out today and tomorrow in coordination with Egypt," Joroushi said.

Sisi, who met with the country's top military commanders to discuss the killings, called for a seven-day mourning period, state television reported.

The United States on Sunday condemned the "despicable and cowardly murder" of the 21 Egyptians.

"This wanton killing of innocents is just the most recent of the many vicious acts perpetrated by ISIL-affiliated terrorists against the people of the region, including the murders of dozens of Egyptian soldiers in the Sinai, which only further galvanizes the international community to unite against ISIL," White House spokesman Josh Earnest said.

The Coptic Church said it was confident the Egyptian government would seek justice. Al Azhar, the centre of Islamic learning in Egypt, said no religion would accept such "barbaric" acts.

The families of the kidnapped workers had urged Cairo to help secure their release. In the mostly impoverished southerly Minya Governorate, relatives screamed and fainted upon hearing news of the deaths.

Egypt, the most populous Arab state, has not taken part directly in the U.S.-led air strikes against ISIL targets in Iraq and Syria, focusing instead on the increasingly complex insurgency within its own borders.

Militants based in Libya have made contact with Sinai Province, a group operating from Egypt's Sinai Peninsula that has changed its name from Ansar Beyt al-Maqdis and pledged allegiance to ISIL.

The group has killed hundreds of Egyptian soldiers and police since the army toppled elected president Mohamed Mursi in 2013 after mass protests against his rule.

With Libya caught in a chaotic power struggle between two rival factions operating their own governments, Western officials worry that militants are taking advantage of the turmoil to strengthen their presence.

A number of militant groups have been active since the fall of Muammar Gaddafi in 2011 left Libya without a strong central government. A few have declared ties to the ISIL and claimed high-profile attacks over recent weeks in what appears to be an intensifying campaign.

Fears that the crisis in neighbouring Libya could spill across the border have prompted Egypt to upgrade its military hardware. French President Francois Hollande has said Egypt will order 24 Rafale fighter jets, a naval frigate and related military equipment in a deal to be signed in Cairo on Monday worth more than 5 billion euros ($5.7 billion).