Thousands of Egyptians gathered in Cairo's Tahrir Square on Friday to show Islamists and others were united in wanting change. 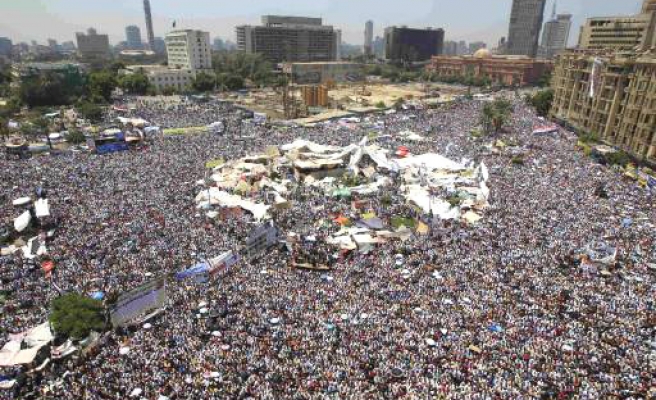 Thousands of Egyptians gathered in Cairo's Tahrir Square on Friday to show Islamists and others were united in wanting change.

Muslim chants such as "There is no God but God" and "Islamiya, Islamiya" dominated. Some waved banners saying "Islamic Egypt." A senior Muslim Brotherhood official described the rally as a "Friday of unity of all political forces".

Some protesters chanted "People and army, hand in hand".

The Brotherhood and other Islamists had joined a big rally with other groups on July 8 demanding a deeper purge of officials who served under ousted President Hosni Mubarak and swifter corruption trials. But since then have stepped back.

Islamists said they wanted to give the army time to respond. Other groups, such as the April 6 movement, have kept up the pressure with some camping out in Tahrir.

"We are glad political forces are showing a united front at this critical juncture in the revolution," Mohamed Adel, spokesman for April 6 said ahead of the rally.

Protesters marched on the Defence Ministry and other military sites in Cairo and other cities last weekend. In the capital, demonstrators clashed with stone-throwing youths while soldiers forming a cordon did little to intervene.

The army rulers, in an unusually blunt statement, accused April 6 of trying to divide the people and the army, which has drawn fire for continuing to use military trials for civilians and failing to move more swiftly to try Mubarak and his allies.

In a show of support for April 6, Mohamed Beltagy, a member of the Muslim Brotherhood's Freedom and Justice Party, said: "The Brotherhood rejects discrediting and distorting any revolutionary force that chooses to rally peacefully."

April 6 has dismissed the army criticism and said it would not ease off the pressure.

"The latest attempts to marginalise us have not worked because the opposition knows if one group gets demonised then that eventually will harm all other groups keen on protecting the gains of the revolution," said Adel of the April 6.

One of the persistent protester demands has been for a swifter trial of Mubarak, who was ousted on Feb. 11 after an 18-day uprising. His trial is now set for Aug. 3 but protesters accuse the army of dragging its feet and being reluctant to hold their former commander-in-chief to account.

Mubarak has been in a hospital in the Red Sea resort of Sharm el-Sheikh since April when he was first questioned, and is now detained there. But he has not been transferred to a prison like his two sons and other officials due to illness.

A source close to Mubarak said his lawyer would tell the court in Cairo next week that he was too sick to attend the opening session.

Many Egyptians see Mubarak's illness as a ploy to avoid publicly humiliating the former president.