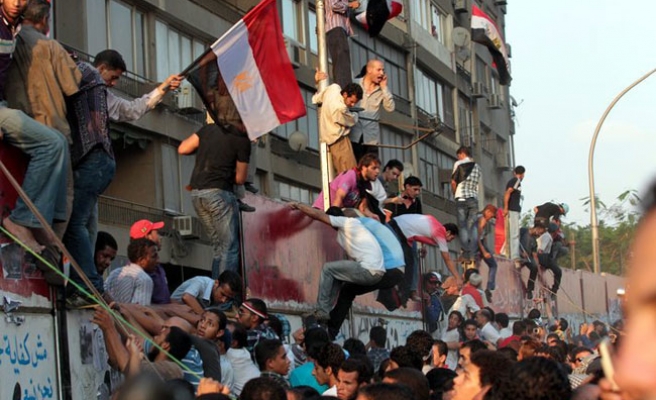 Hundreds of Egyptians stormed the building housing Israel's mission in Cairo and threw embassy documents and its national flag from windows, while state television said on Saturday that Israel's envoy, his family and staff had been flown home.

The Interior Ministry said at least 450 protesters were injured during a day of confrontations with police, who used teargas and fired in the air in an effort to disperse them. State television said 46 police were injured.

It was the second time the embassy was attacked since five Egyptian border guards were killed last month by Israelis during an operation against gunmen. That incident prompted Egypt briefly to threaten to withdraw its envoy.

The Cairo demonstrations continued well into the early morning hours, with police confronting at least 2,000 protesters near the embassy, a witness said.

They fired teargas and fired in the air to disperse the crowds. Protesters lit fires in the street using tyres, threw petrol bombs and stones and set at least two police vehicles alight.

U.S. President Barack Obama called on Egypt to "honour its international obligations" and protect the Israeli mission after protesters, who had been demonstrating at Tahrir Square to push for a timetable for reforms and an end to military trials for civilians, smashed up a wall protecting the embassy building.

Israeli ambassador Yitzhak Levanon left Cairo early on Saturday, Egyptian state television said. State media earlier reported that an Israeli plane had arrived in Cairo to take the ambassador, his family and staff back to Israel.

Israel said it had asked the United States for help in guarding the embassy, located on the upper floors of an apartment block overlooking the Nile. Extra police and army vehicles had been sent to the area to protect it.

Thousands had converged on Tahrir Square, the centre of the pro-democracy protests that toppled Mubarak, after Friday prayers for what was billed as "Correcting the Path" protests.

Some later marched to the opposite bank of the Nile in Giza. Demonstrators used hammers, large iron bars and police barricades to tear down the wall, erected this month by Egyptian authorities after daily protests over the killing of five Egyptian border guards in Sinai.

The five died during an Israeli operation against gunmen who had killed eight Israelis. Egypt threatened to withdraw its ambassador from Tel Aviv. Israel has stopped short of apologising, saying it is still investigating how the Egyptian troops were killed.

Protesters scaled the embassy building, removed the Israeli flag for the second time in less than a month and burned it.

Some also tried to break into the embassy and reached the entrance hall but had not entered inside the mission itself, Israeli and Egyptian officials said.

"The embassy itself has not been breached," an Israeli Foreign Ministry official told Reuters in Jerusalem. An Egyptian security source confirmed that the embassy offices had not been entered.

Police responded by firing teargas and blanks into the air, witnesses said.