Police and military personnel were nowhere to be seen in Tahrir Square on in the streets around it. 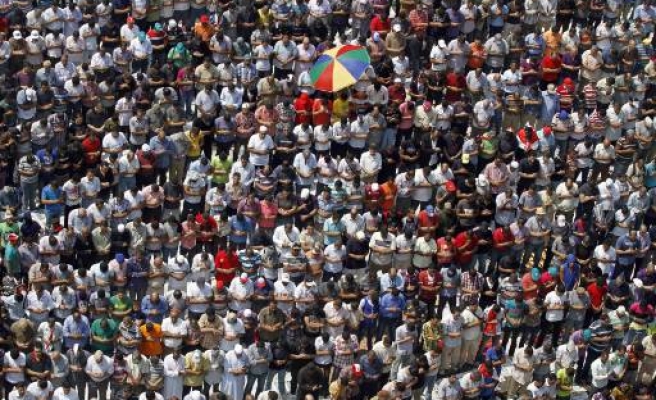 Hundreds of Egyptian activists gathered in Cairo's Tahrir Square on Friday to launch a day of demonstrations demanding a clear road map to democracy and an end to military trials for civilians.

People who spearheaded an uprising that ousted President Hosni Mubarak in February gave a "Correcting the Path" billing to the latest protests. The demonstrations could give a sign of popular sentiment towards the ruling military council since Mubarak went on trial last month.

Islamists, including the political party set up by the Muslim Brotherhood -- Egypt's best organised political force after the dissolution of Mubarak's National Democratic Party -- distanced themselves from the planned protests.

Hundreds of people started filing into Tahrir Square on Friday morning, some holding anti-corruption banners, one of which read, "The people want to purify the state".

Police and military personnel were nowhere to be seen in Tahrir Square on in the streets around it.

The Interior Ministry said it had cleared police from the square for 24 hours from midnight to let Friday's protests proceed peacefully.

Many Egyptians complain that they have yet to see real fruits of the uprising, in which some 850 died. Some say they fear the new military rulers are secretly plotting to stay in control behind the scenes after parliamentary and presidential elections the army has promised to hold by the end of 2011.

Thousands of Egyptians camped in Tahrir Square for weeks in July to push for faster political reforms and to speed up trials of Mubarak and aides for killing demonstrators. Security forces moved in to end the protests and stationed policemen in the square, epicentre of the unrest that toppled Mubarak.

The military council said in a recent statement on its Facebook page that it would allow peaceful demonstrations, but would not tolerate any attacks on public facilities.

Activists said more than 30 groups and political parties would be represented at the protest.

The Democratic Front party said it would demand that military rulers prepare a "comprehensive timetable that will spell out the steps for the interim period, starting with the presidential elections".

Presidential hopeful Mohammed ElBaradei, former head of the U.N. nuclear watchdog agency, said Egyptians were entitled to demonstrate peacefully, especially since many of their demands had yet to be realised.

But Mohamed Saad el-Katatni, secretary-general of the Freedom and Justice Party set up by the Muslim Brotherhood to contest parliamentary elections scheduled for November, suggested it was not yet time for more demonstrations because previous protests had already brought some results. "In case they are not achieved, then we return to the square," he said.