Students staged protests for the fourth consecutive day against Morsi's overthrow and granting powers to security personnel to arrest students on campus. 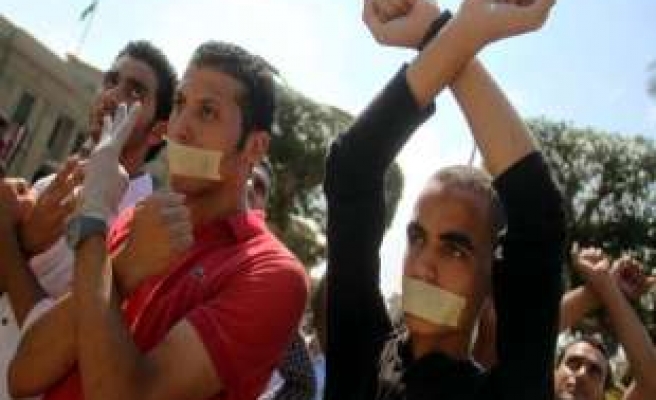 Egyptian students staged rallies in a number of universities and schools against what they call a "military coup" against elected President Mohamed Morsi and granting arrest powers to administrative security personnel.

Students staged protests for the fourth consecutive day in the Assuit University against Morsi's overthrow and granting powers to security personnel to arrest students on campus.

Students also protested in the Suez Canal University against the arrest of two colleagues during a protest one day earlier and what they said "assault" by security forces on their rally.

A protest was also staged in the Beni Sueif University against the arrest of two students in a demonstration against arrest powers granted to campus security personnel.

The protesting students flashed the four-fingered sign commemorating a pro-Morsi sit-in in the Rabaa al-Adawiya square in Cairo.

Protests against Morsi's ouster and power arrests were also staged in the Mansoura University.

Carrying pictures of colleagues killed in last month's dispersal of pro-Morsi sit-ins, the students called for the release of their detained classmates.

According to eyewitnesses, a female student was detained by security personnel over possessing leaflets "insulting" the army.

But Morsi supporters dismiss the claim, saying that the student has distributed a questionnaire about the "military rule".

Demonstrations also spread to a number of Egyptian schools.

A student protest was dispersed by security forces in Fayyoum, south of Cairo, and their leaflets were set ablaze.

Eyewitnesses said that security forces "assaulted students and arrested four of them". A passer-by was also arrested.

A student protest was also dispersed in the Ezes secondary school in the northern city of Alexandria.

A protest was also staged by students in al-Mansoura secondary school in the Nile Delta province of Dakahliya following the broadcasting of a song praising the Egyptian army.

In the Upper Egyptian province of Minya, a teacher was ordered to be probed after "causing conflicts among female students after insulting the army and the Church".