Police beat a handful of demonstrators with batons at a protest of about 300 Egyptians gathering against "plans to hand power to the president's son." 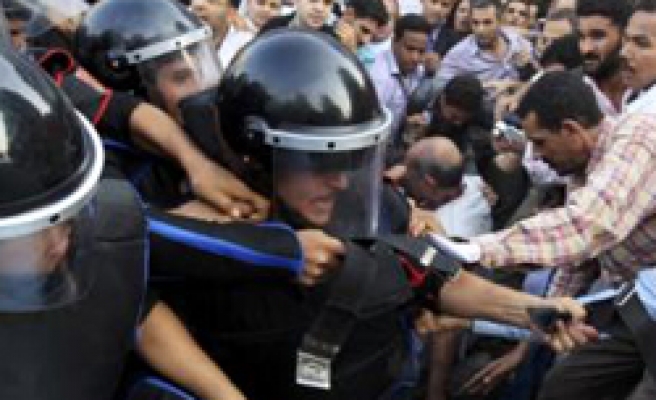 Police beat a handful of demonstrators with batons on Tuesday at a protest of about 300 Egyptians gathering against "plans to hand power to the president's son."

A large sign carried by the crowd read "no to prolonging (President Mubarak's mandate), no to hereditary power."

President Hosni Mubarak, 82, in power since 1981, has not said if he will run in the 2011 election. But persistent rumours about his health have helped fuel talk he could hand power to his politician son, Gamal, 46. Both deny any such plan.

Protests have become more frequent ahead of a parliamentary election in November and the presidential vote next year, Reuters said.

"No, no to succession. No to Mubarak, no to Gamal, no to Alaa," the protesters shouted, naming the president's two sons.

They had planned to march right up to the palace but were blocked by several thousand police, deployed around 500 metres (yards) in front of the building.

Police also confiscated videotapes from BBC and Al-Jazeera cameramen at the protest, according to the station reporters.

A security official, speaking on condition of anonymity because he was not allowed to speak to the press, said 60 activists were detained and kept in police vans during the protests.

Representatives from one youth movement also said at least 30 of its members were arrested just trying to reach the site of the demonstration.

Some key opposition figures are calling for a boycott of the legislative polls due to the failure of the regime to meet demands for political reforms.

Wafaa Hanafy Sehab, a lawyer and political activist, who was at the protest, said it was the first of a series of protests calling for Egyptians not to vote.

"We are for boycotting elections because they are a sham," she said.

The protests were organized to coincide with the anniversary of the death of Ahmed Orabi, an Egyptian army general who had led a popular revolt against British dominance of Egypt in 1879.

"We here repeat the slogan 'We will not be inherited as of today' which leader Orabi said to the Khedive and the European powers," said Mohamed Ehsan Abdel Kodous of Egypt's main opposition group the Muslim Brotherhood.