Mubarak returns to court on Monday to face charges of killing protesters, in a hearing that could decide if the head of the ruling military council will take the stand as a witness. 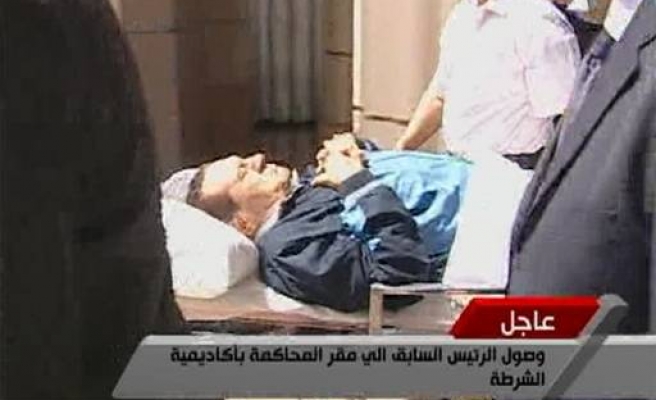 Former Egyptian president Hosni Mubarak returns to court on Monday to face charges of killing protesters, in a hearing that could decide if the head of the ruling military council will take the stand as a witness.

Defence lawyers say that any testimony by Field Marshal Mohamed Hussein Tantawi on Mubarak's role in trying to suppress the 18-day uprising, in which more than 800 people were killed, could decide the fate of the 83-year-old.

Tantawi, who was defence minister for two decades under Mubarak, heads the military council that took power when Mubarak was ousted on Feb. 11 by the mass protests.

Mubarak, accused of corruption and ordering the killing of protesters, went on trial on Aug. 3 in a case that has gripped the Arab world, where leaders rule for life and are seldom held to account.

The first Arab head of state to stand trial in person since popular uprisings swept the Middle East, the former air force commander faces charges that could carry the death penalty.

Mubarak appeared on a hospital bed, behind the bars of a courtroom cage with his sons, Gamal and Alaa, who will also appear again on Monday.

About 850 people were killed during the uprising and over 6,000 were wounded when security forces fired live rounds, rubber bullets and used water cannon and batons against the protesters.

The prosecutor accuses Mubarak of authorising the use of the live ammunition to quell the protests.

Mubarak denied all accusations during the opening session, which was aired live and counted as his first public appearance since he was toppled.

In the first court session, defence lawyers asked for Tantawi, former intelligence chief Omar Suleiman and about 1,600 others to testify as witnesses.

Defence lawyers said the accounts would be vital for either incriminating or exonerating Mubarak from involvement in killing protesters.

"Tantawi's testimony would help the court determine whether Mubarak gave orders to Interior Minister Habib al-Adli to fire at protesters or whether Adli was acting independently," one member of the defence team, who asked not to be named, said.

A judge on Sunday set the next hearing for Adli and six of his lieutenants for Sept. 5.

Lawyers for the families of those killed have also demanded Tantawi testify in the trial.

"It is important for the court to meet the requests of the defence team, especially the request to hear the accounts of Field Marshal Tantawi in court to determine whether Mubarak asked him to confront and fire at protesters or not," the lawyer said.

"The defence team sees Tantawi as a compurgator, or a witness whose testimony would exonerate Mubarak. The plaintiffs' lawyers, however, expect him to testify that he received orders to fire, which is necessary to convict Mubarak," another lawyer handling the case said.

Essam Soltan, one of the plaintiffs' lawyers, said Judge Ahmed Refaat would ask lawyers to justify their request to summon Tantawi to testify before ruling on it.

The cases of the defendants are interlinked and each could accuse his superior of giving the orders to fire, thus weakening the case against Mubarak, Soltan said.

The military said officers called in by the judge to give their testimony would attend. But a judicial source said even if Tantawi were asked to testify, his testimony would come later in the trial to shield the army from taking the heat in the controversial case.

Tantawi's military council has promised a transition to democracy in the Arab world's most populous country -- a process far from complete.