Mubarak, on trial for conspiring to kill protesters, was wheeled into a courtroom cage in a hospital bed on Wednesday. 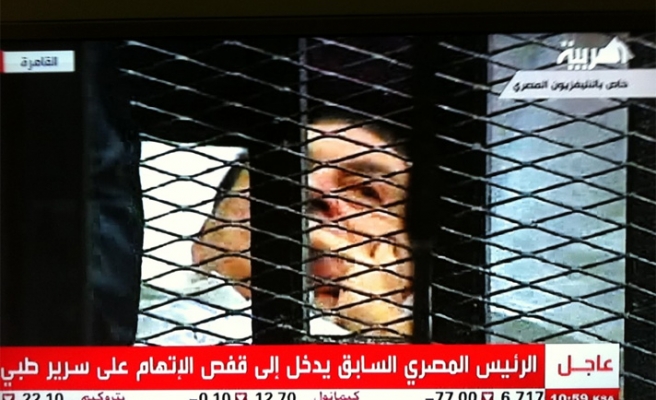 Egypt's Hosni Mubarak was wheeled into a courtroom cage in a hospital bed on Wednesday to face trial for killing protesters, an image that thrilled those who overthrew him and must have chilled other Arab autocrats facing popular uprisings.

If convicted, Mubarak could face the death penalty.

The 83-year-old former president, looking frail and gaunt, denied the charges, which could carry the death penalty.

Mubarak is the first Arab leader to stand trial in person since popular uprisings swept the Middle East this year.

The prosecutor said Mubarak "had the intention to kill" peaceful protesters during an 18-day revolt that toppled him on Feb. 11 and during the previous decade.

He accused Mubarak of allowing former Interior Minister Habib al-Adli to use live ammunition on protesters, and also charged him with corruption and wasting public funds.

About 850 people were killed during the unrest.

A military council led by a long-serving defence minister, Field Marshal Mohamed Hussein Tantawi, took over when Mubarak quit. It has promised a transition to democracy in the Arab world's most populous nation -- a process far from complete.

Mubarak's lawyer asked for Tantawi to be summoned as a witness in the trial, echoing a demand lodged by Adli's counsel, who had also asked for former intelligence chief Omar Suleiman and other political and military officials to testify.

The lawyer, Farid al-Deeb, said he wanted to summon a total of more than 1,600 witnesses -- a proposal with the apparent potential to turn the trial into an interminable exercise.

Attempts to put Tantawi on the stand could embarrass the military, which had tried to distance itself from Mubarak.

Many Egyptians still revere the army but some protesters say it must also be reformed, faulting its handling of the transition and its vast economic interests in Egypt.

"Mubarak's lawyer wants to embroil Tantawi and generals in council who have said several times in the media that they were given orders to fire at protesters to disband protests," military analyst Safwat al-Zayaat said.

One army officer said Mubarak's trial proved the military's good intentions. "This step unites the army and the people in building a better system, free of corruption," he said.

Protesters had camped out in Cairo's Tahrir Square for three weeks in July seeking a swifter trial for Mubarak and faster reforms. They feared the military council would use Mubarak's illness as a ploy to avoid publicly humiliating the war veteran and ex-president who ran Egypt for 30 years.

A lawyer acting for families of the dead demanded execution for Adli, who is being tried alongside Mubarak, the ex-president's two sons Alaa and Gamal, and six former officers.

The white-clad defendants were all held in a big metal cage, as is customary in criminal trials in Egypt, apart from a Mubarak-linked businessman who is being tried in absentia.

Another lawyer demanded that Mubarak be moved to Torah prison, where the other defendants are held, from a hospital in Sharm el-Sheikh on the Red Sea where he has been since April.

After the session, Judge Ahmed Refaat said Mubarak would be moved to a Cairo hospital and would have to attend the next session of his trial, set for Aug. 15. He said the court would reconvene on Aug. 4 in Adli's case.

The trial, televised around the world, transfixed Egyptians and other Arabs, most of whom have spent their lives under authoritarian systems shaken by this year's "Arab Spring".

"I'm so happy. I feel tomorrow will be better and that the next president knows what could happen to him if he goes against his people," Ahmed Amer, 30, a water utility employee, said outside the Cairo courtroom, where crowds had gathered to watch proceedings on a giant screen erected outside.

Pro- and anti-Mubarak protesters faced off, some hurling stones. Hundreds of police tried to calm them down. The state news agency said 53 people had been wounded in the clashes.

At a small pro-Mubarak rally, people chanted: "Oh Mubarak, hold your head high" and "We will demolish the prison and burn it down, if Hosni Mubarak is sentenced."

Counter-chants of "Raise your voice, freedom will not die," rose from nearby group hostile to Mubarak.

Speculation had swirled before the trial about whether Mubarak would turn up in the Cairo court.

Ahmed Farghali, 24, among protesters who had gathered outside the Sharm el-Sheikh before Mubarak was flown to Cairo, said he could not believe he would see the president locked in a cage. "It was beyond my wildest dreams," he said.

Tunisian President Zine al-Abidine Ben Ali, the first Arab leader to be ousted this year, was tried and sentenced to jail in absentia. He fled to Saudi Arabia.

Earlier Iraq's Saddam Hussein was toppled by U.S.-led forces, then tried and hanged in 2006.

For some of his opponents, Mubarak's appearance smacked of political theatre to gain sympathy.

"Why is he on a stretcher? Is he handicapped? This is a playing on people's emotions so we can all start crying over an old man," Mohamed Naguib, 32, said in Sharm el-Sheikh, where some chanted: "The people want the execution of the killer."

In his only public comments since quitting, Mubarak vowed in April to clear himself and his family from accusations of corruption. Few Egyptians believed they would see him in court.

"If you feel sympathy for any dictator broken and standing in a cage, remember him when he was unjust on the throne," Marian wrote on Twitter, using the website that became a tool in rallying the masses during the 18-day uprising against him.

The defendants were caged in a hall that can seat hundreds of people in the Police Academy, where Mubarak had praised the police just two days before demonstrations erupted on Jan. 25.

Police used live ammunition, rubber bullets and teargas on protesters in Cairo and other cities. When the army finally stepped in and Mubarak was flown off to internal exile in Sharm el-Sheikh, Egyptians erupted into euphoric celebrations.

Egyptians blame Mubarak for economic policies they say filled the pockets of the rich while many of the nation's 80 million people scrabbled in squalor to feed their families. They are also angry at his repression of any opposition.

Yet some are reluctant to see a man who was a bomber pilot and then leader of the air force in the 1973 war with Israel put in the dock. Others are simply tired of the disruption protests have caused and want to return to their daily lives.