Egypt's Mursi to address Tahrir rally ahead of oath-taking

Egypt's President-elect Mohamed Mursi's party appears to have lost in a power struggle with the ruling military council over where he will take his oath of office. 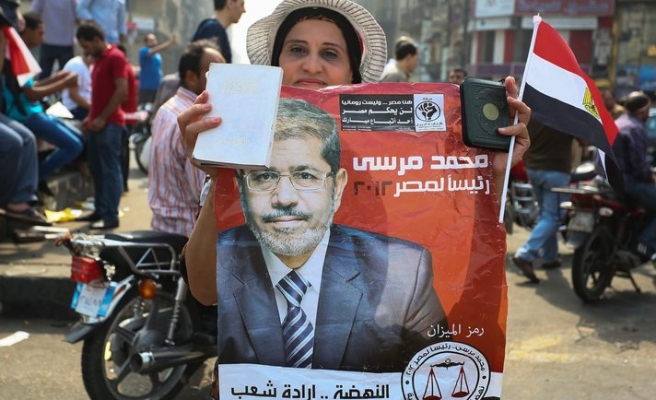 Egypt's President-elect Mohamed Mursi will give a speech to crowds in Tahrir Square on Friday but his party appears to have lost in a power struggle with the ruling military council over where he will take his oath of office.

Details about the historic swearing-in ceremony were announced in a late statement from the presidency on Thursday which stated that Mursi will take the oath of office in front of the Supreme Constitutional Court on Saturday at 11 a.m. Cairo time (0900 GMT).

After being sworn-in as the first freely elected civilian president of the biggest Arab state, Mursi will attend a celebration in Cairo University where he will give a speech, according to the presidency statement.

The Muslim Brotherhood had wanted Mursi sworn-in before parliament, in line with past practice, but an army-backed court dissolved the Islamist-dominated lower house earlier this month.

The generals said the same court should hear Mursi take his oath of office.

Mursi held talks about the oath-taking on Thursday with the Muslim Brotherhood's general guide Mohamed Badie and prominent public and legal figures and politicians at the presidential palace.

Following the meetings, a presidential spokesman issued a statement that mentioned only Mursi's plans to address the nation on Friday from Tahrir Square where hundreds of protesters have been camped out for weeks to press the military council to swiftly transfer all powers to civilian rulers.

The army council that has ruled Egypt since pushing former President Hosni Mubarak aside to calm a popular uprising last year has promised to hand back control by July 1.

Yet the military has demonstrated that it intends to keep its hands firmly on the real levers of power.

"The government will have a defence minister who is head of the Supreme Council of the Armed Forces," Major-General Mohamed Assar said on private CBC television.

Asked by the talk show host if this meant Tantawi would keep his defence portfolio, Assar said: "Exactly. What is wrong with that? He is the head of the SCAF, the defence minister and the commander of the armed forces."

The military council led by Tantawi has managed a turbulent and sometimes violent transition period in which Egypt's first free parliamentary and presidential elections have taken place.

Assar's assertion that Tantawi would remain in place even before Mursi has been sworn in on Saturday illustrates the limits the military seeks to set on his presidential authority.

In a statement on June 17, the generals cut a swathe through their own previous interim constitutional decree, as well as the Mubarak-era constitution, grabbing more power for themselves.

The republic's past presidents, all drawn from the military, have had the title of supreme commander of the armed forces.

Under the new decree, the SCAF said it was in charge of all military affairs and that its head, not the president, would command the armed forces until a new constitution is written.

After the Supreme Court ordered parliament dissolved on June 14, the SCAF assumed legislative powers, which Assar said it would also exercise until a new assembly is elected.

Among other actions in a package denounced by the Muslim Brotherhood as a military coup before Mursi's election win was confirmed on Sunday, the council also named a National Defence Council to run defence and foreign policies.

Although Mursi and his future prime minister will also serve on the council, they will be outnumbered by the generals in a body whose decisions will be taken by majority vote.

Assar insisted that Mursi, a 60-year-old U.S.-trained engineer, would have full presidential prerogatives, even as he outlined curbs on his right to decide on war or peace.

"The president is the head of state with full powers. The president makes a decision to go to war in consultation with the military rulers," Assar said, adding that this was normal practice in other countries, including the United States.

The United States, determined to preserve Egypt's peace treaty with Israel and U.S. access to the Suez Canal, must now deal with the Muslim Brotherhood.

"We're keeping the lines open" to all sides, said one U.S. official who spoke on condition of anonymity.

U.S. Secretary of State Hillary Clinton, who has delayed plans to visit Egypt for now.