Citizens seeking jobs, compensation from the state or clemency for jailed relatives crowded at the palace gates, showing how Mursi's unprecedented popular mandate has raised hopes for a more responsive kind of government. 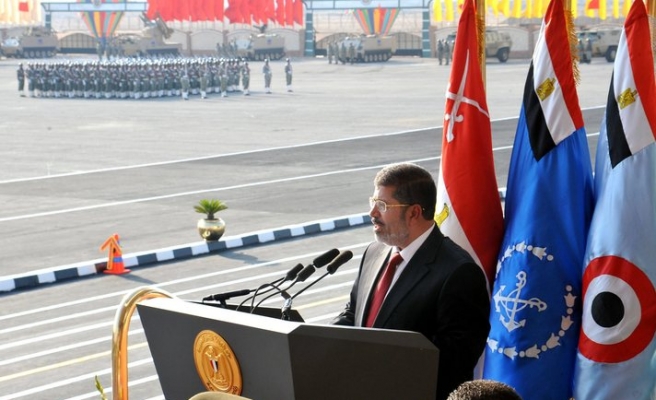 If Egypt's new president, Mohamed Mursi, needs any reminder of the weight of expectations bearing down as he begins work, he can glance from a window of the presidential palace.

Citizens seeking jobs, compensation from the state or clemency for jailed relatives crowded at the palace gates on Sunday, showing how Mursi's unprecedented popular mandate has raised hopes for a more responsive kind of government.

"My name is Alaa Ahmed Bayoumy and I am here to ask for a higher pension," said one 52-year-old among the group mingling with palace security officials. "I have five children and my rent costs more than my pension. That is unacceptable."

As Mursi worked to replace an army-backed interim cabinet with his new government, members of the public bearing petitions were allowed to rest in the gardens outside the palace perimeter, where they ate, drank and lounged in the shade.

Ordinary Egyptians were never allowed near the palace under President Hosni Mubarak, toppled in a popular revolt last year.

Anxious to show a break with his autocratic predecessor, Mursi has said he will not turn his back on a compatriot and will seek justice for all Egyptians, including those killed or wounded in the uprising.

Like Mursi, Mubarak had humble village origins, but the former air force chief slipped out of touch with an increasingly impoverished population during three decades in power.

In Mubarak's day, staging political protests was almost impossible, with large numbers of police always on hand to disperse and often arrest anyone brave enough to try.

Streets plied by the presidential motorcade were smartened up and lined with crowds of admirers bussed in for the occasion - or simply closed to traffic for hours, creating huge jams for motorists, to allow the president to speed across the capital.

When Mubarak occupied the presidential palace in central Cairo, security was tight.

On Sunday, uniformed police and state security officers sporting suits and dark glasses tried to deal calmly with the crowd hoping to enter the presidential precincts, taking down names or suggesting that people make written requests for help.

Visitors pleading volubly for an audience with Mursi were occasionally let inside the palace grounds.

An old woman wearing a black veil, Ahlam Mohamed, sat outside on the pavement. "I want a job for my son. He has been staying at home for months and he is the one who feeds us. Without him we will die," she said.

Haitham Ezzat, 29, demanded compensation because a facial injury sustained during the anti-Mubarak revolt had stopped him working.

"I am hoping to meet the president," said another man, 61-year-old Sayed Rashad, who said he had not been compensated for a war wound even despite filing a lawsuit against the army.

"We are here to tell the president to help us quickly. If he wants to get the production cycle moving again, we need to be paid and secure all our rights," said Atef Mondy, 38, head of the Movement for Fired Workers.

Some 40 percent of Egyptians live on less than $2 a day. The uprising was driven by a sense that nothing could get worse, but for many it has.

The economy is floundering and joblessness is growing after political turmoil hammered investment and tourism.

State finances are stretched, which will make it hard for Mursi to spend his way to popularity.

Many Egyptians are hoping Mursi will turn on state taps and provide benefits on a far greater scale than those distributed by his Muslim Brotherhood.

The Brotherhood's charity and social welfare networks helped to make it one of Egypt's most popular political forces, providing cheap food, medicine and other essentials to the poor.

Some wonder whether Mursi, whose prerogatives were clipped by the military even before he took office on Saturday, has the power to drive through radical change.

Any attempt to tackle poverty among Egypt's 82 million people will run up against an inefficient, lethargic bureaucracy with vested interests that could slow the pace of reform.

For now, Mursi is promising swift measures with an immediate social impact, pledging to get traffic moving, restore security, collect rubbish, and clear bottlenecks in the distribution of subsidised bread, petrol and cooking gas.

But with the military keeping a grip on national security, a remit that may include control of the Ministry of Justice, some popular demands may be impossible for Mursi to meet.

Among those waiting to see the 60-year-old president on Sunday were three women - Nahed Hussein Abdel Fattah, Marwa Khaled and Nadia Mohamed Ahmed - demanding the release of family members who they say were framed and jailed under Mubarak.

"We know Mubarak's people were tyrants and thugs. They used to fabricate crimes against people and they did that to my husband," said Ahmed.

As the day wore on, some of the petitioners at the palace gates began to lose patience. Some drifted away, others began shouting at the police keeping them outside.

"Open this door. It will never stand between you and your people, nor will it protect you from us," they cried.