Egyptians who camped in downtown Cairo in July to press for faster political reforms have also demanded that Mubarak and officials in his administration be tried for political corruption. 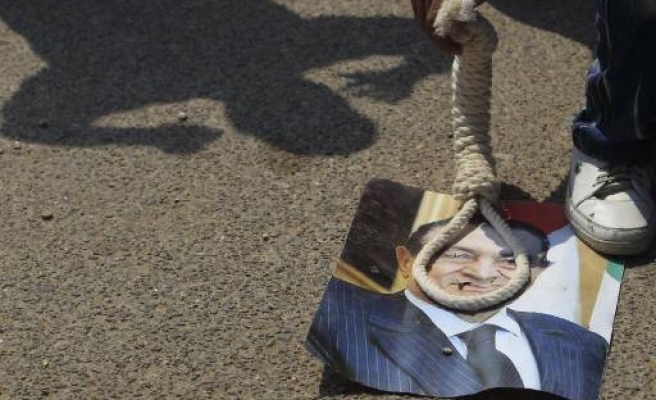 Egypt's government revived an amended version of a 60-year-old anti-corruption law on Wednesday, the state news agency MENA said, in a move that could affect the trial of ousted President Hosni Mubarak and his aides.

Egyptians who camped in downtown Cairo in July to press for faster political reforms have also demanded that Mubarak and officials in his administration be tried for political corruption, prompting the cabinet to look into reviving a law drafted after the 1952 revolution that overthrew the monarchy.

MENA said the cabinet "approved the legislation and decided to send it to the Supreme Council of the Armed Forces to ratify it". The military council has ruled Egypt since Mubarak's fall.

Under the law, dubbed the 'Treason Law', any government official, parliament member or minister may be punished for abuse of power if they, their relatives or acquaintances benefited from any public office they had held.

The law, first passed under the late President Gamal Abdel Nasser, covers financial crimes, including altering prices of property, commodities or services for personal benefit. Abuse of office to achieve better jobs for officials or others is also punishable under the law.

Mubarak, who was forced to step down in February after weeks of popular protests, is on trial for authorising the use of force which resulted in the death of some 850 demonstrators.

He also faces charges of corruption and abuse of power during his three decades in office.

Analysts say that in the absence of a specific law that criminalises political corruption, Mubarak may have a chance of being exonerated from the charges.

"The law criminalising political corruption facilitated legal pursuit in cases in which crimes cannot be pinned down under criminal law," Bahaa Abu Shuqa, a lawyer, said. "The Treason Law is a legal instrument that allows for pre-emptive procedures against officials or any public servant."

Responding to concerns that the old law might have lapsed, Justice Minister Mohamed Abdel Aziz el-Guindy said that laws remain in effect unless they are directly overwritten.

According to MENA, Guindy said the amendments to the law were procedural and did not alter its essence so "it would not be construed as a new law that would not apply retroactively".