Egypt's Sisi heads to New York on 1st trip to US

According to a diplomatic source, al-Sisi would deliver the statement of the Arab group in the UN climate summit on Tuesday. 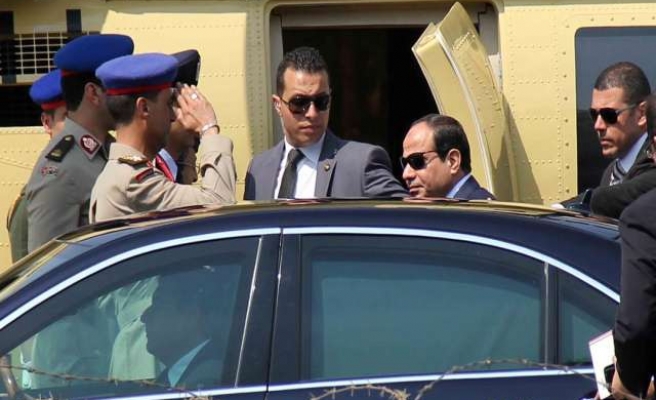 Egyptian President Abdel-Fattah al-Sisi headed Sunday to New York on his maiden visit to the United States, during which he will attend the 69th Session of the U.N. General Assembly.

According to a diplomatic source, al-Sisi would deliver the statement of the Arab group in the UN climate summit on Tuesday.

The speech would "express the developing nations' demand for technical and financial support from the major industrial powers to help the former upgrade their industrial and development potentials," the source told Anadolu Agency on the condition of anonymity.

"The demand stems from the fact that the developing nations bear the brunt of increasing pollution levels that had consequently exacerbated the problem of climate change," the source added.

On Thursday, the Egyptian leader would address the 69th Session of the U.N. General Assembly, the source said.

Al-Sisi, in his speech, would "review the progress made in the process towards the establishment of democracy and modern state in Egypt" following mass protests that led to the ouster of Mohamed Morsi, the source said.

This is the first visit by al-Sisi - a former army chief who is widely seen as the architect of Morsi's ouster last summer and subsequent imprisonment - to the United States since he was declared the winner of a presidential poll conducted in May.

Some opposition groups had already announced plans to stage protests against al-Sisi's visit, accusing him of staging a "military coup" against elected Morsi and overseeing a deadly crackdown against dissent.

However, a group representing the Egyptian community in New York called on Egyptians to welcome the Egyptian leader in the city and show support for the latter in the face of "the sinister plot to spoil Egyptians' joy with the visit."