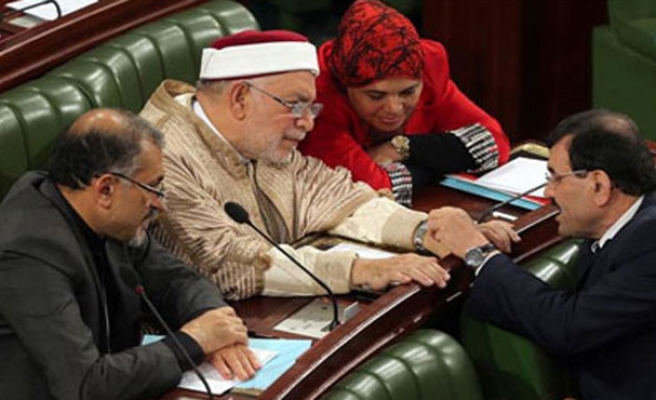 The new line up is a compromise after a cabinet proposed by Essid last week looked likely to be rejected in parliament. Lawmakers will vote this week to ratify the new government.

The deal reached on Sunday came after Tunisian Prime Minister-designate Habib Essid's new cabinet faced a threat of rejection in parliament last week from key parties opposed to his choice of ministers.

Ennahda holds the second largest number of seats in parliament.

Prime Minister-designate Essid courted controversy in recent weeks when he selected ministers from secular Nidaa Tounes, the leading party in parliament, and other smaller partners, while shunning Ennahda.

Representatives from the leftist Popular Front have rejected Essid's new cabinet partly because it contained former officials from Ben Ali's regime, some of whom they said were suspected of corruption in the past.

"I made some adjustments so we can gather all political forces and get to work immediately on the challenges we are facing," Essid said.

Essid's new government will have to push through tough economic reforms demanded by Tunisia's international lenders and continue a campaign against militants.

Lawmakers will vote this week on whether to ratify the new government.

Nidaa Tounes member Slim Chaker was named as finance minister, and Taib Baccouche, also from Nidaa Tounes, will be foreign minister. Ennahda was given employment ministry and several other junior minister posts.

In the 217-seat parliament, Nidaa Tounes holds 86 seats and has some backing from the liberal, secular UPL party, which has 16 seats. But without the support of Ennahda, the party is left short of the 109 majority they need to ratify the cabinet.

Four years after its uprising against autocrat Zine El-Abidine Ben Ali, Tunisia has been held up as an example of political compromise and democratic transition with a new constitution and free elections.