We can increase trade value to $10 billion rapidly and enchance cooperation in many areas, Erdogan said. 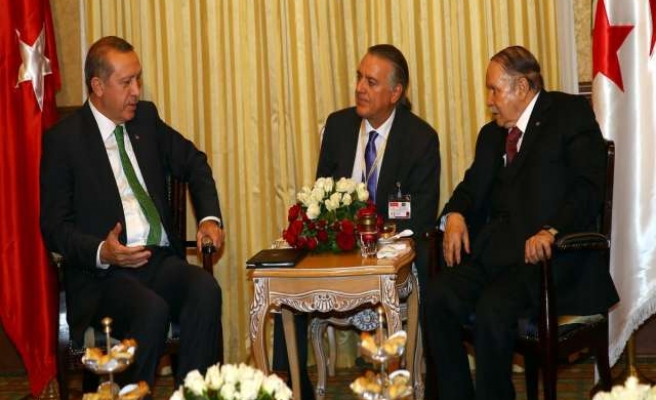 Turkey's President Recep Tayyip Erdogan said on Thursday that the value of trade between Turkey and Algeria could rise to $10 billion.

“We can increase this value to $10 billion within a short time, and enchance our cooperation in the military, political, economic, commercial and cultural fields,” Erdogan said.

Speaking at a press conference, Erdogan said that the current value of trade in goods between Turkey and Algeria was $4.5 billion, and that he believed the two countries could achieve great things together.

Erdogan told the press that he and his Algerian counterpart Abdelaziz Bouteflika had made a careful evaluation of the relationship between Turkey and Algeria in talks held Wednesday and Thursday, during his official visit to the African country.

Erdogan visited the “old city” of Algeria’s capital, Algiers, which is listed in UNESCO’s World Heritage List, during his official visit in the country.

President Erdogan and his wife Emine Erdogan also visited the Ketchaoua mosque in the Casbah of Algiers, the citadel of Algiers listed in the World Heritage List.

The Ketchaoua mosque, built in 1520 by Barbarossa Hayreddin Pasha, an Ottoman admiral of the fleet, is being restored by the Turkish Cooperation and Coordination Agency.

Erdogan, during his visit last year to Algeria, had agreed to help restore the mosque, which had been closed since 2007.

President Erdogan has left Algeria on Wednesday and traveled to Equatorial Guinea to participate in the Turkey-Africa summit.