"The health situation is dire here at Pagak and is getting worse by the day," a consultant with Medicines Sans Frontiers, who asked not to be named, told Anadolu Agency. 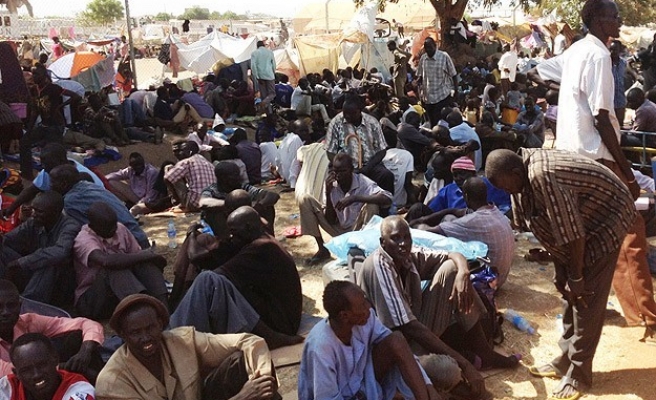 Representatives from local and international relief agencies are ringing the alarm over the dire situation in Ethiopia's western Gambella region, which has borne the brunt of a massive influx of refugees fleeing the ongoing conflict in next-door South Sudan.

Over the past week alone, thousands of refugees have entered Ethiopia via a single entry point at Pagak, which was only established a few weeks ago, Stanley Miseleni, head of the Gambella sub-office for the U.N. Refugee Agency (UNHCR), told journalists.

But as more refugees arrive, the situation has deteriorated, with aid workers now calling for international intervention.

"The health situation is dire here at Pagak and is getting worse by the day," a consultant with Medicines Sans Frontiers, who asked not to be named, told Anadolu Agency.

He said five children had died so far after entering the country.

"The sanitary situation is really worrying and should be improved," he added.

This week, the UNHCR, along with Ethiopia's Agency for Refugees and Returnees Affairs (ARRA), facilitated a visit by diplomatic envoys in Ethiopia to Gambella's two newly-established refugee camps – both of which now teem with refugees from war-torn South Sudan.

There are currently 72,000 refugees from South Sudan in Ethiopia, according to Miseleni.

ARRA deputy head Ato Ayalew Aweke, for his part, said the number was closer to 100,000.

Both, however, point to a significant gap between the number of refugees and the assistance available.

"There is a yawning gap, but I cannot tell you in figures," Aweke told AA. "The influx continues and the international community should do something."

Aweke said the visit by foreign envoys to the camps of Akula, 40km west of regional capital Gambella, and Pagak, 80km west of Akula, had been arranged to give them the opportunity to see the situation on the ground with their own eyes.

"What we saw here today is very, very horrible and it demands the close attention of the international community," German Ambassador to Ethiopia Lieselore Cyrus said.

Other envoys vowed to notify their respective governments about the dire situation so that immediate aid might be sent.

It was through the Pagak entry point that Gneo Garu Tang finally made it to Ethiopia after a 27-day journey by foot as part of a large group who fled the oil-rich town of Malakal. A 24-year-old mother of three, Tang came with her small children to Ethiopia and left her husband behind.

"I fled the fighting in Malakal," she said. "[But] my husband is fighting."

After crossing the border on Monday, she got screened, tagged with a wrist band for eligibility, and told to stay. But she is still waiting to be given a tent as a shelter for her family.

Only an end to the fighting and the return of peace in her home country will ensure her family's reunion.

But for now, tens of thousands of her countrymen – 90 percent of whom are women and children – are languishing under a searing sun in a humid and oppressive climate. What is more worrying is that May is approaching – a month of heavy rain in the area, which is also prone to flooding.

South Sudan has been shaken by violence since last December, when President Salva Kiir accused his sacked vice president, Riek Machar, of attempting to overthrow his regime.

The conflict has already claimed more than 10,000 lives, with the UN estimating that some 3.7 million people in South Sudan are now "severely food insecure" while more than 820,000 have been displaced.

If the name of the refugee camp doesn't correct to Akula or Tierkidi it will cause more deaths of refugees in the camp. This not Nuers land where they can name whatever they want in Nuers language and the place a never ever called that by ancestorsOf the land. Please Gatluak Tut, correct this or wait until lit hunt you down.