According to an EU diplomatic source, Ashton's talks with Fahmy tackled EU-Egypt ties and the latest political developments in Egypt. 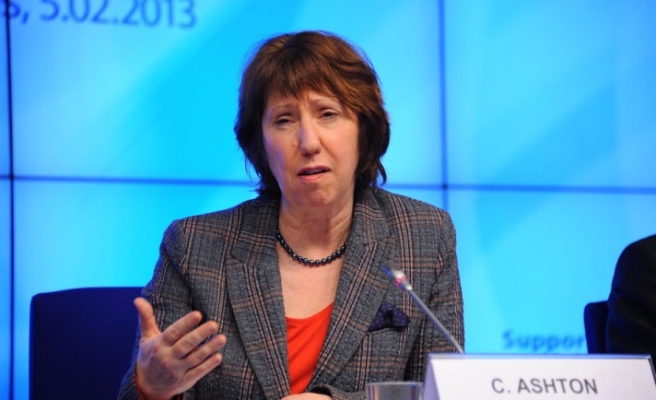 Catherine Ashton arrived in the Egyptian capital on Tuesday evening for her third visit to the country since the July 3 ouster of elected President Mohamed Morsi.

According to an EU diplomatic source, Ashton's talks with Fahmy tackled EU-Egypt ties and the latest political developments in Egypt.

"The European Union will remain a main partner for Egypt," he said. "There will be talks about boosting economic cooperation in the coming period."

Planned talks are also expected to tackle the crisis in Syria and renewed Palestinian-Israeli peace talks.

Following Ashton's meeting with Fahmy, she is scheduled to head to the Shura Council (the upper house of Egypt's parliament) where she will meet with Moussa.

On Tuesday, a diplomatic source said that Ashton would try to persuade Muslim Brotherhood leaders to join a "national dialogue" and contest upcoming parliamentary polls.

In return, the source said, Egypt's military-backed government would halt its ongoing crackdown on the group.

The biggest challenge facing Ashton will be persuading the Brotherhood to accept an army-imposed "roadmap" for Egypt's political future, the source said.

The source ruled out a possible meeting between Ashton and ousted Morsi.

He has not been seen in public since and his whereabouts remain unknown.

Ashton met Morsi during an earlier visit to Egypt in July, shortly after the Islamist leader's removal.