A spokeswoman for IOM, Jemini Pandya, said an operation to evacuate thousands of Egyptians and other foreigners trapped in Tripoli by the latest fighting would begin within days. 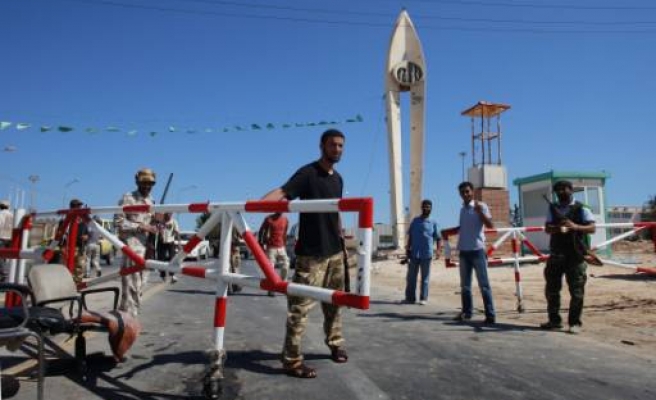 An international body said on Friday it would mount an operation, probably by sea, to evacuate thousands of foreigners trapped in Tripoli by rebel advances that have put Muammar Gaddafi's capital under siege.

The rebels, who have transformed the battlefield this week with victories taking them ever closer to the city, launched an assault east of the capital but were taking heavy casualties, a Reuters reporter at the front line said.

Rebel advances west and south of Tripoli in recent days have cut the road links between the capital and the outside world and severed the supply lines of Gaddafi's forces, putting his 41-year-old rule under unprecedented pressure.

In a sign of fighting hitting closer to Gaddafi's inner circle, the brother of the spokesman who has served as the leader's public face was reported killed.

A Reuters reporter said rebels had launched an assault on Gaddafi's forces in Zlitan, east of the capital, where fighting has been bloodier and advances far slower than in the west. A large number of wounded were being brought to the rebels' field hospital.

The rebels suffered a setback on Thursday when Gaddafi's forces crushed an uprising inside Zlitan.

A spokeswoman for the International Organization for Migration (IOM), Jemini Pandya, said an operation to evacuate thousands of Egyptians and other foreigners trapped in Tripoli by the latest fighting would begin within days.

"We are looking at all options available, but it will probably have to be by sea," she told a Geneva news conference. More than 600,000 of an estimated 1.5 million to 2.5 million foreigners, most of whom are Asian and African migrant workers, have fled six months of fighting in Libya. However, many have remained in Tripoli, which until this week was far from fighting and a safe two-hour drive from the Tunisian border.

Moussa Ibrahim, the spokesman whose briefings and interviews have been broadcast worldwide throughout the six-month-old uprising, has served as the highest-profile face of Gaddafi's government.

His brother, a 25-year-old student named Hasan Ali, was killed by a NATO helicopter gunship in the central square of Zawiyah after going there with a group of others to check on friends, a Libyan official said.

"We are surprised by this and we condemn it. NATO planes have become a way of killing civilians and providing air cover for rebels to advance on Libyan cities," he said.

Zawiyah, west of the capital, fell to the rebels his week, transforming the long-stalemated conflict by blocking the road linking Tripoli to the Tunisian border.

Ibrahim, who has repeatedly denied reports of rebel advances, said on state television on Thursday: "We reassure people that we are making progress on all fronts." According to the JANA news agency, he promised all Libyans payments of 500 dinars, about $300, as reward for being steadfast.

West of Tripoli on Thursday, some 200 rebel fighters fired guns in the air to celebrate the capture of Sabratha, next to Zawiyah. Fighters said they controlled 90 percent of the ancient Roman town, a UNESCO World Heritage site. That extends their blockade of the coastal highway to Tripoli.

South of Tripoli, they also control Garyan, which straddles the main route to the capital from the south. A Reuters reporter there said it was largely quiet on Friday. Hospital officials said one rebel had died and three were seriously hurt the previous day in clashes with Gaddafi troops west of the town.

East of the capital, the rebels have failed to match their breakthroughs to the west.

Four people were killed and five badly wounded in Zlitan when Gaddafi's troops attacked rebels who aimed to stage a revolt to coincide with a push from rebel-held Misrata, an anti-government activist called Mohammed told Reuters by telephone from the town.

"There are still bodies in the streets. The situation is very difficult. It was a preemptive attack by Gaddafi's forces," he said.

Despite denials, the rebels and Gaddafi loyalists have held negotiations this week. Former French premier Dominique de Villepin told the daily Le Parisien he had attended "extremely difficult" talks with both on Monday in a Tunisian resort.

"I was indeed there, but I cannot make any further comment because it would compromise the chances of success," he added.

Libyan Prime Minister Al-Baghdadi Ali Al-Mahmoudi declined to comment on any talks other than to say the government had been in contact with all sides.

"You will hear in the next few days good news that will make you happy if you are for peace," he said.