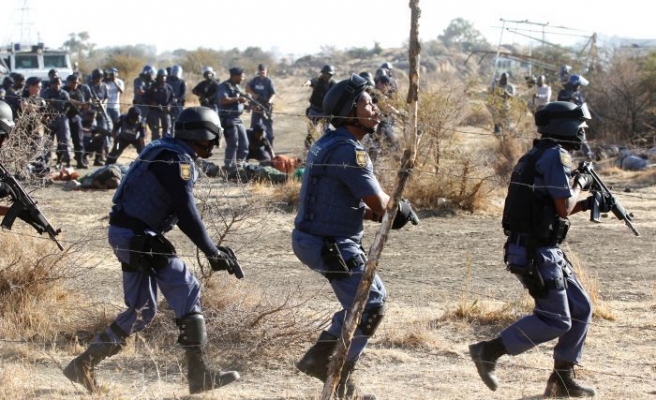 Families of 34 striking South African miners shot dead in 2012 called on Tuesday for police who fired on them to be prosecuted as a judicial enquiry into what is known as the "Marikana massacre" neared its end.

Police involved in the country's bloodiest security incident since apartheid say they were acting in self-defence when they opened fire on miners carrying out a wildcat strike at Lonmin's mine in Marikana.

The two-year investigation into the Aug. 16, 2012 shootings is expected to wrap up this week, before retired judge Ian Farlam files his recommendations to President Jacob Zuma's office by March.

"We are recommending a full criminal investigation into the actions of the police," said Dumisani Ntsebeza, a lawyer representing the families of the deceased miners.

In the gallery, widows and mothers of the dead miners cried and covered their faces when graphic pictures of the shattered faces of the workers were shown during the closing arguments.

"The commission brings up bad memories. It feels it happened yesterday," said 43-year-old widow Mathabang Ntsenyeko. "Right now we have nothing at home, we don't have any money coming in, we don't work."

As well as probing the shootings, the Marikana commission has a broader remit to look into labour relations, pay and accommodation in South Africa's mines - issues seen as spurring the wildcat strike that preceded the killings.

The probe into what widely is known as the "Marikana massacre" has put political pressure on Zuma and his team.

Deputy President Cyril Ramaphosa, a trade unionist-turned-billionaire, was accused of putting political pressure on the police to end the restive strike, which had resulted in nine deaths before the police shooting.

Ramaphosa, who was a Lonmin director at the time of the shooting, said he was in contact with Lonmin leadership and the ministers of police and mining during the strike but only to help prevent further loss of life.