Thousands of people lined the white sand beaches at the northern tip of Zanzibar island, awaiting survivors and information. 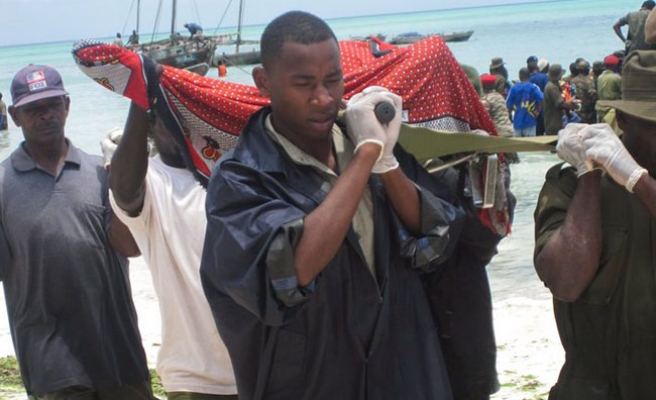 At least 107 people died when a ferry taking passengers from Zanzibar to Pemba island overnight capsized and more bodies were still being brought to hospital, a doctor said on Saturday.

"We are still receiving many bodies by truck loads ... The death toll will likely be much higher," Karim Zam of the Mnazi Mmoja hospital in Zanzibar, told Reuters as he continued to count bodies.

He said 107 bodies had already been identified.

Witnesses fear the death toll could rise sharply and fishing boats and tour operators are scouring the sea for those still missing in the disaster, which happened overnight.

At the popular tourist destination of Nungwi, fishing boats and diving tour vessels ferried survivors ashore, a dozen or fewer at a time, and crowds waded waist deep in the water as the boats approached shore, desperately searching for relatives.

Zanzibar, also know as Unguja, and Pemba are the two main islands of the Zanzibar archipelago, a popular destination for tourists visiting their pristine Indian Ocean beaches.

"The ship's manifest shows that the vessel travelling from Unguja to Pemba islands had more than 500 passengers on board," said Zanzibar Police Commissioner Mussa Alli Mussa told Reuters.

"Some 260 passengers have so far been rescued ... we have recovered several bodies but I can't give you the exact death toll at the moment because the situation is very volatile," he told Reuters.

Tour operators and local diving instructors spent the night at sea scouring the waves for survivors.

"Many of us got here about 2.30 a.m. (2330 GMT) this morning," said Suleiman Amis, 32, who works on a local diving tour boat. "We sent out some boats to search for the survivors, but we did not find them until very, very late."

"We have friends who we know took that boat and we want to go back out to find them as soon as possible," he told Reuters.

Pemba is about 40 km (25 miles) from Zanzibar. Passengers who regularly take ferries between the two islands said the vessels are in a poor state of repair and are often overcrowded and loaded with cargo.

"They normally pack us in like sardines in a can. And for that I really fear this could be a very big disaster," said resident Mwnakhamis Juma.

The government in Zanzibar said last month it planned to invest in bigger, more reliable vessels to ferry passengers between the two islands.

"We are fearing the greatest calamity in the history of Zanzibar. This is a disaster," said a government official, who declined to be named.

Two small overloaded boats capsized and were swept away in high seas off Tanzania's coast in January this year and in May 2009, a vessel just off Zanzibar sank with dozens aboard, killing six.

Police commissioner Mussa said rescue workers with the aid of some fishing boats in the area were helping to rescue more passengers and recover bodies to bring them to Zanzibar's main town for post-mortems and identification.

"Because of strong ocean winds, some of the bodies could even be washed up in Tanga (mainland Tanzania)," he said. "The cause of the accident cannot be confirmed at the moment."

A parent in Mkoani on Pemba island was already mourning his three children, who were aboard the capsized ferry.

"I had two sons and a daughter coming back to Pemba from a school holiday break ... and I am fearing for the worse," said Juma Bakar.