Fertile land in northwest Kenya that nobody wants 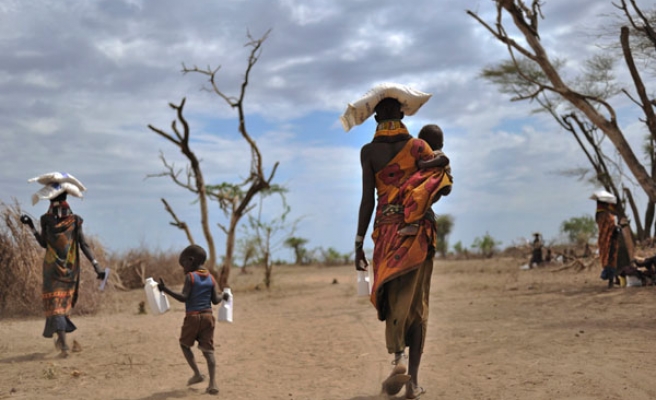 In Kenya’s northwest, along the Kenya-South Sudan border, lays one of the driest and poorest towns in the East African country, Turkana.

This is a stretch of land that is evergreen and considered to be one of the most fertile areas in the county despite the little rainfall that it receives.

The grassy plains are the ideal location for the Turkana people, pastoralists who roam with their livestock.

They are in constant search for green pasture for their cattle in their drought-stricken region.

Residents from Turkana told Anadolu Agency that the 30 kilometer piece of land has always been fertile and green.

“From Nadapal to Lokichogio, it is around 30 kilometers. It is fertile and the land has always been green despite the drought that is being experienced here,” Lucy Ajele told Anadolu Agency.

“We would rather take our cattle to Uganda for grazing instead of visiting this place that is just a stone’s throw away from us,” she said.

“Those are killing fields where no one sets foot,” she said. “If you ignore our warnings and venture into that place, no one will ever see you again. You will die. If you are lucky, someone may find your body and thus you will be buried, if not, then wild animals will eat you.”

Ajele told Anadolu Agency that thousands of people have died in that area since the 1990s, saying that the Turkana people of Kenya have been in constant fighting with the Toposa militias from South Sudan for a long time.

“Vicious cattle rustling is normal here,” she said. “Bandits from South Sudan always invade and attack us, they kill hundreds and steal our cows. If they do not attack then they hide in that stretch of land and kill whoever approaches.”

Turkana West MP Daniel Nanok told Anadolu Agency that the stretch of land would have formed a rich agricultural sector in the area, if only locals could access it.

“This land belongs to Kenyans but they cannot access it,” he said. “This could be a very rich agricultural community for the people of Turkana who are always in search of pasture.”

“With the high cases of insecurity in the border region between South Sudan and Kenya, locals stay away from this place,” he said. “The land cannot currently be accessed due to insecurity.”

Margaret Loyar, another resident who lives near the Nadapal area, told Anadolu Agency that many people have been killed during cattle raids in the area.

“Cattle rustling in this area has claimed the lives of many of my childhood friends,” she said. “They either attack us or just wait for people to go through that green fertile land.”

“We would rather go to Uganda for grazing than here; there are so many people who I knew as children that have perished in these killing fields,” she said.

In 1992, more than 200 men, women and children were killed by Toposa militias in Turkana.

In 2008, the Toposa militia attacked a town in Turkana killing eight people and stealing over 5,000 cattle.

Kenyan police killed seven Toposa militants, part of a 200-man group, who had gone to raid Kibish village in Turkana in 2013.

Insecurity in the area is fueled by the availability of sophisticated firearms at an affordable rate from war-torn South Sudan, making the Kenya-South Sudan border a very volatile region.

There have been numerous peace meetings organized to reconcile the two pastoralist communities, but nothing has been achieved thus far.