"Over 300 houses were destroyed in Zango town alone while about 280 houses were affected in the remaining villages," said Rawayau. 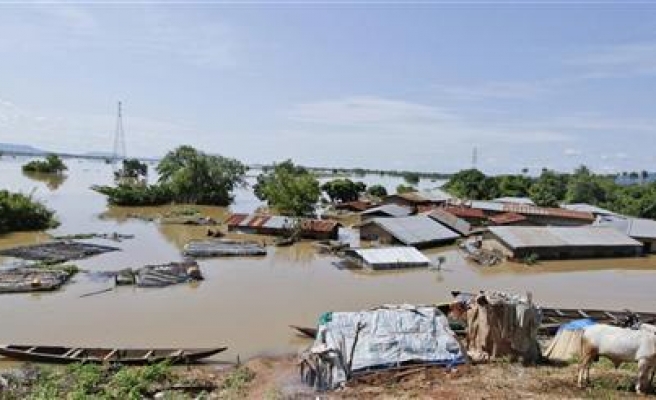 “Water overtook everywhere you can talk of in the village,” Mustapha Maigari, a resident of the Zango village, told Anadolu Agency.

He said the rainfall started at about 5 a.m. when they were getting set for morning prayers.

“Our houses came crashing down as if they were pushed by bulldozers. So, there was pandemonium everywhere as we started shouting for help. Luckily enough, no lives were lost," Maigari added.

“But we lost virtually everything as most of us could not rescue any of our items. In fact, when it started, our concern was how to save the lives of our wives, children and the old ones.”

“It also wreaked huge havocs on several other villages across other local councils, particularly in Zango local government where 580 houses were destroyed along with numerous livestock, with several hundreds of our people displaced,” he told AA.

"Over 300 houses were destroyed in Zango town alone while about 280 houses were affected in the remaining villages."

Rawayau said nobody died in the incidents, and reiterated the call on Nigerians to vacate areas already designed as flash points in the flood alert issued earlier this year by the National Emergency Management Agency (NEMA).

The report emphasized the need for Northwest and Southwest Nigeria to prepare for heavy flooding akin to the one in 2012 which claimed several lives and properties worth several millions of dollars.

The RERA chief said the state government is providing relief materials to the affected and called on NEMA to assist.

Yahaya Galadima, the chairman of a state government caretaker committee appointed for the Charanchi council, said he and other officials have toured the affected communities and would soon relocate the victims to safer places.

Galadima said relief materials such as foodstuff, mats and drugs have been provided for the victims, and pledged that the administration would also provide better shelter to stave off diseases.

The floods are leaving behind a trail of destruction.

In Gadar-Yantulana, sources told AA that the heavy rainfall overflew a nearby pond, thereby destroying houses and killing domestic animals.

Farm produce worth millions of naira were also washed away by the flood, they said.

Mahmoud Yahaya, a resident of the area, said victims of the disaster in Charanchi are currently taking refuge at a four-classroom block of a Primary School in a nearby village.

He complained of overcrowding as victims were put together in the four-classroom building and warned of potential outbreak of disease unless something is urgently done.

"All our houses were affected by the flood. Our animals died in hundreds and our livelihood is gone,” Ismail Sabiu, a livestock farmer who resided in Dargade, one of the villages ravaged by the flood, told AA in a telephone interview.