Exact statistics on the number of deaths and the full extent of displacement and damage caused by the floods is not yet known, although citizens in affected areas speak of higher figures. 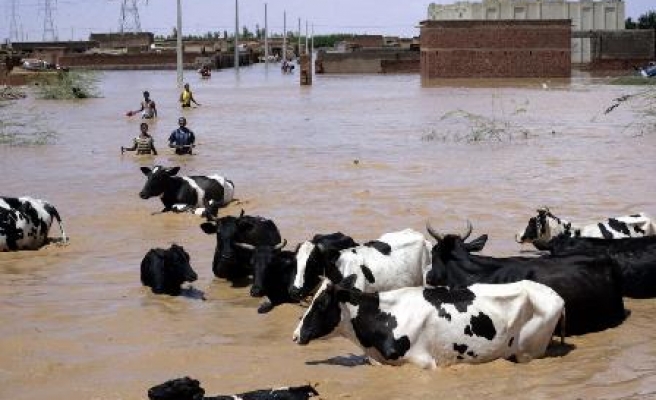 A wave of floods and torrential rains has swept large swathes of the Sudanese capital of Khartoum and most states, killing many people, destroying hundreds of homes and leaving behind a trail of destruction.

"I worked for the Ministry of Irrigation and served in the military to be able to build a home for my children," Ali Abbakar, 73, told the Anadolu Agency. "Now I've lost everything."

"We appeal to all relevant governmental and humanitarian organizations to assist us in this tragedy," he said.

Abbakar said the only official body that deserved praise was the Civil Defense Authority, because it had assisted citizens and evacuated victims to safe areas.

"But we still need more humanitarian assistance," he said.

Heavy rains and flash floods have devastated large areas across Khartoum and other Sudanese states.

According to an info-graphic issued by the UN Office for the Coordination of Humanitarian Affairs (OCHA) in collaboration with humanitarian partners, the Sudanese Red Crescent Society (SRCS) and the Commission for Voluntary and Humanitarian Work (CVHW), at least 11 people have been killed by flooding and 120,000 affected nationwide since July 31.

The SRCS and the CVHW both report that at least 18,000 homes have been damaged or destroyed in the affected states.

Large numbers of people, meanwhile, remain stranded in the open and have taken to higher ground.

Exact statistics on the number of deaths and the full extent of displacement and damage caused by the floods is not yet known, although citizens in affected areas speak of higher figures.

The report mentioned that those displaced by the floods remain in urgent need of humanitarian assistance, especially shelter, health services, clean water and sanitation.

Civil society organizations and volunteer youth groups have exerted great effort to deliver emergency aid to those affected, along with extensive boat ferrying to evacuate citizens marooned by flood water.

Fatima Ahmed, 46, said the only assistance she and her family had received was from a Nafeer group, a very active volunteer youth group that had collected funds and supplies to deliver to those affected.

The majority of citizens interviewed by the AA in the capital were critical of the authorities' handling of the crisis, which they described as imprudent.

"Either the canal or residents of Al-Marabei and Al-Kriyab should be relocated," Abbakar, visibly distraught at having lost his home, told the AA.

He also complained about the lack of adequate drainage infrastructure.

Hamza Mohmed Ali, a 44-year-old resident of the hard-hit Al-Marabei region in the Eastern Nile province, said the problem was not only due to planning and engineering flaws.

"What's unfortunate is that the governor of Khartoum State refused to split the asphalt road to allow water from rains and floods to pass through," he told the AA.

"This failure to act led to the collapse of many houses in the area on the first day [August 2], until the resident engineer finally took matters into his own hands and shattered the asphalt," Hamza said.

He added: "We are going to take legal action against the governor for his improper decision."

Meanwhile, in Al-Kriyab area, many citizens refused to speak to reporters or even allow them to take pictures. They said that the popular committees (local authorities) had ordered them not to speak to the press.

The opposition, meanwhile, has urged the Sudanese government to declare the country a disaster area in order to qualify for humanitarian aid.

It has also complained that the government's ability to deal with the crisis has fallen short of what is actually needed.

The government, however, strongly rejects this assertion, insisting the crisis can be contained.

The Sudanese Meteorological Authority has forecast more rain in the days ahead.