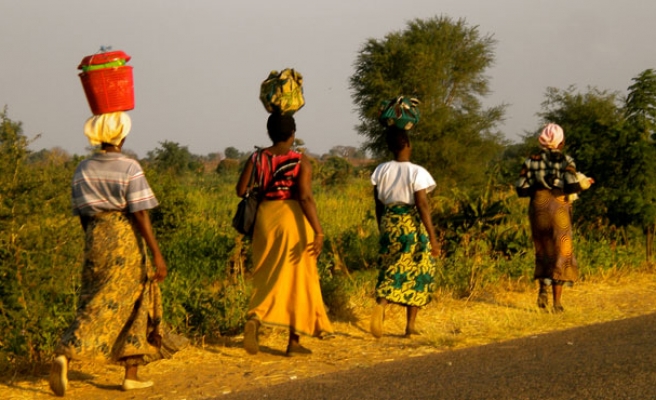 Malawi's agro-based economy, which had recently started showing some signs of stability, is now in reverse gear.

Experts blame the trend on the massive damage caused by the country's ongoing flood disaster.

So far, 176 people have been confirmed dead, 200,000 displaced, and thousands of domestic animals – such as goats, cattle, pigs and chickens – lost to heavy flooding.

As if that was not enough, thousands of hectares of cultivated land have also been swept away.

"My crops were washed away," Clement George, who is housed at a camp for displaced peoples in Nsanje, one of the hardest-hit districts, told The Anadolu Agency.

"I lost everything in the floods," he lamented. "I will have to start anew and replant the crops."

The scale of the crisis prompted President Peter Mutharika to declare a state of national disaster last week and appeal for emergency assistance.

"At least $10 million is needed to respond to this disaster," Vice-President Saulos Chilima told AA in Blantyre.

Malawi is an agro-based economy, with agriculture accounting for more than 30 percent of the country's GDP.

With the country's main crops, such as tobacco and maize, damaged by flooding, the economic outlook does not look good.

The International Monetary Fund (IMF), the Reserve Bank of Malawi and the treasury had earlier forecast that the domestic economy would attain a high growth rate in 2015.

The IMF had projected that in 2015, Malawi would attain real GDP growth of 5.8 percent.

The government, according to a 2014 economic report, is also upbeat about the this year's economic growth rate on account of higher crop production levels, the stability of the exchange rate, and the deceleration of the inflation rate.

But indications on the ground point to a different situation.

"The economy will be badly affected, but this is a situation that could not be avoided," Chilima told a press briefing in Blantyre at which he updated the country on relief efforts. "It is a disaster."

He insisted that initial assessments of the damage were merely estimates.

"There is a huge cost attached to this crisis… the devastation can be seen by all of us. The picture is mucky," Chilima lamented.

Minister of Agriculture, Irrigation and Water Development Allan Chiyembekeza, meanwhile, warned that millions of Malawians were at risk of food shortage this year.

"We are encouraging farmers to replant crops with early maturity to at least harvest some food this year," he told AA.

The ministry is also encouraging farmers to plant other food crops other than maize, the main food crop.

"If it is in short supply next year, it will induce demand-pull inflation, a type of inflation arising from a situation where more people have more money to spend on goods that are in short supply on the market," Thom Mpinganjira, a banker, told AA.

Usually, when maize is in short supply, Malawi's year-on-year inflation rate goes up because the grain has more weight in the consumer price index, a basket of commodities that computes the inflation rate.

Nico Asset Managers Limited, an investment advisory firm, is already worried about the impact of the disaster on the inflation trajectory in 2015.

"Government expects inflation to decline to 15.6 percent in 2015 due to prudent monetary policies and increases in agricultural production," the firm said in its annual report for 2014.

"However, the late rains and the damage to crops due to excessive rains could have a negative impact on agricultural output, which would add pressure to food inflation," it warned.

Meanwhile, frequent and, in some instances, prolonged emergency load shedding is paralyzing the manufacturing sector.

Since the onset of the rains, large amounts of debris and trash have been washed down the Shire River, clogging intake screens in the process, according to the Electricity Supply Corporation of Malawi (ESCOM).

They are not generating any power from Nkula A and B, because machines and the entry point are all clogged with silt, trash and logs, so no water is entering the machine.

"We have lost 124 megawatts [about 35 percent] due to the floods," ESCOM CEO John Kandulu told AA. "It is a huge loss of business for us."

The loss of power means small- and medium-scale businesses have to use generators.

"I have no choice but to close my shop all day as I cannot afford a generator," Mayeso Phiri, who runs the Yoxxy Barbershop in the Chinyonga Township in Blantyre, told AA.

Economist Edward Chilima warned that this would have a huge economic impact.

"I am worried with electricity problems. In the short term, this will have a huge impact on the economy, as it is already slowing down most productive economic sectors, as they are not performing to capacity," he told AA.

So far, five major roads have been closed due to flood-related damage that rendered them impassable.

Many minor roads across the country have also been rendered unusable.

This has disrupted businesses, forcing hospitality establishments to cancel bookings. It has also prompted transporters to use longer routes and spend more on transport.

Flights to Blantyre were also cancelled at the peak of the flooding last week, as planes failed to land due to poor weather conditions.