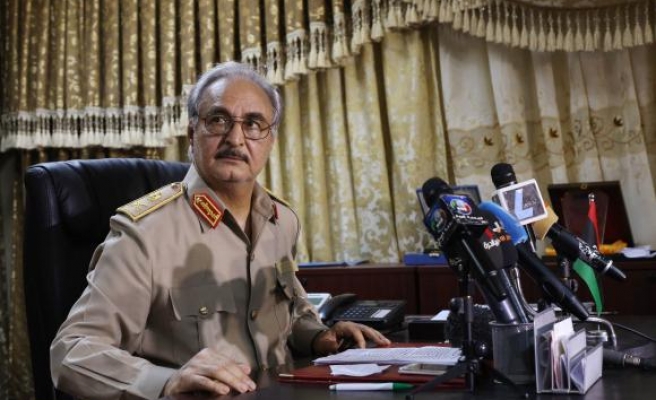 Forces loyal to former Libyan army general Khalifa Haftar claimed an air strike on an armed group near Tripoli on Monday, a senior commander said, in what would be the first air strikes in western Libya for three weeks.

War planes attacked Misrata forces in August just before they took the capital. Haftar also claimed that attack, but U.S. officials said the planes belonged to the United Arab Emirates and Egypt - two Arab countries which have cracked down the Muslim Brotherhood, which has ties to the Misrata forces.

Three years after the ousting of Muammar Gaddafi, Libya is divided. The government and elected parliament have relocated to Tobruk in the far east since losing control of the capital, and a rival assembly and government has been set up by the Misrata force in Tripoli.

Haftar emerged as a renegade commander fighting rival militant groups but has recently entered into a frail alliance with the government in Tobruk, part of the chaos and ever-changing alliances in post-Gaddafi Libya.

"We attacked positions of the Libya Dawn," Saqer al-Jouroushi, Haftar's air defence commander, told Reuters. He was referring to the Misrata-led alliance which took Tripoli.

"They conducted air strikes on our revolutionaries", a Gharyan city official close to the Misrata forces said, accusing Egypt and the UAE of being behind the attacks.

However, analysts doubt that Haftar can conduct air strikes with planes from his bases in the east as Libya has only a tiny and outdated air force damage during the 2011 civil war.

Diplomats say Libya is turning into a conflict zone for competing regional powers as the country faces the prospect of becoming a failed state or even descending into civil war.

On Sunday, Prime Minister Abdullah al-Thinni said Qatar, which has backed the Muslim Brotherhood, sent three military planes loaded with weapons to a Tripoli airport controlled by the Misrata forces. The government had already accused Sudan of having tried to arm the opposition group.

Libya's government is unable to control dozens of former rebel groups who helped topple Gaddafi but now fight each other for power and a share of oil resources. The fluid situation in Tripoli has been worsened by a separate battle in the eastern city of Benghazi between the army and Haftar's forces in spite of their loose alliance.

Haftar forces has threatened to bomb Benghazi's port unless authorities there closed it to cut off arms supplies to militants, Jouroushi said.

"We will bomb any ship approaching the coast and hold the port director responsible for it," Jouroushi said. Ansar al-Sharia had used the port to get ammunition and weapons, he said.

Libya's neighbours and European nations have been trying to bring the waring parties together to find a political solution. Algeria said it was willing to host a reconciliation conference.

"Our Libyans brothers are welcome in Algeria if they deem that Algeria is the ideal place to launch the unification process to build a better future," Algerian Foreign Minister Ramtane Lamamra told reporters in Algiers.