Forces loyal to Muammar Gaddafi fired a Scud missile for the first time in the country's civil war, a U.S. defence official said. 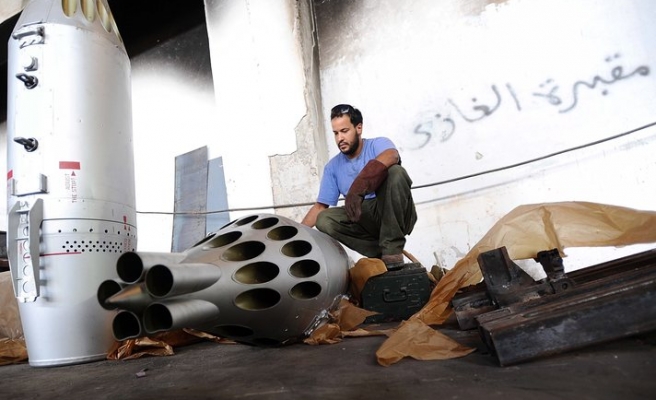 Forces loyal to Muammar Gaddafi fired a Scud missile for the first time in the country's civil war, a U.S. defence official said, after rebel advances left the Libyan leader isolated in his capital.

Rebels fighting to end Gaddafi's 41-year rule seized two strategic towns near Tripoli over the past two days, cutting the city off from its supply lines and leaving the Libyan leader with a dwindling set of options if he is to stay in power.

The Scud missile was fired on Sunday morning from a location about 50 miles (80 km) east of Sirte, Gaddafi's home town, and landed east of the coastal oil town of Brega where rebels are fighting for control, the U.S. official said.

The missile came down in the desert, injuring no one, said the official, who was speaking on condition of anonymity. There was no immediate comment from the government in Tripoli.

Firing the missile, which poses little military threat because it is so inaccurate, is evidence of the Gaddafi administration's desperation, said Shashank Joshi, Associate Fellow at Britain's Royal United Services Institute.

"It's an obvious sign that the regime's back is to the wall," he said.

In the six months of fighting up to now, Gaddafi's forces have been using short-range Grad rockets but have not before deployed Scud missiles, which have an estimated range of about 185 miles (300 km).

In the rebel headquarters in the eastern city of Benghazi, officials said the Scud firing was a sign Gaddafi would do anything to protect his power.

"Gaddafi troops are using his last gun. He's crazy," said Mohammad Zawawi, media director for rebel forces. "We're scared he'll use chemicals. That's why we're trying to end this war and we hope to end it with the least number of casualties."

"We can't prevent the scuds but we hope NATO can. NATO has the technology to detect them."

Analysts say the rebels' strategy now is to isolate the capital and hope the government will collapse, but they say it is possible too that Gaddafi will opt to stage a last-ditch fight for the capital.

In a barely audible telephone call to state television in the early hours of Monday morning, Gaddafi called on his followers to liberate Libya from rebels and their NATO supporters.

"Get ready for the fight ... The blood of martyrs is fuel for the battlefield," he said.

He was speaking as rebels made their most dramatic advances in months of fighting, shifting the momentum in a conflict that had been largely static and was testing the patience of NATO powers anxious for a swift outcome.

Rebel forces in the Western Mountains south of Tripoli surged forward at the weekend to enter Zawiyah. The town is about 50 km (30 miles) west of Tripoli and, crucially, straddles the main highway linking the capital to Tunisia.

A day later, rebels said they had captured the town of Garyan, which controls the highway leading south from Tripoli and linking it to Sabha, a Gaddafi stronghold deep in the desert.

"Gaddafi has been isolated. He has been cut off from the outside world," a rebel spokesman from the Western Mountains, called Abdulrahman, told Reuters by telephone.

Early on Tuesday, rebels on the outskirts of Zawiyah said forces loyal to Gaddafi were still on the eastern edge of the town, from where they have been attacking with mortars, Grad rockets and sniper fire.

Medical workers at one of the town's hospitals told a Reuters reporter that 20 people, a mixture of rebel fighters and civilians, were killed on Monday, and the death toll for Tuesday had already reached one.

Officials in Tripoli deny Zawiyah is under rebel control, but government spokesman Moussa Ibrahim acknowledged on state television that rebel fighters were in Garyan.

"There are still armed gangs inside the city. We are able to drive them out," he said.

A U.N. envoy arrived in neighbouring Tunisia, where sources say rebels and representatives of the government have been holed up on the island resort of Djerba for negotiations.

Gaddafi's spokesman denied Tripoli was in talks about the leader's departure, saying reports of such negotiations were the product of a "media war" being waged against Libya.

Talks could signal the endgame of a civil war that has drawn in the NATO alliance and emerged as one of the bloodiest confrontations in the wave of unrest sweeping the Arab world.

Rebels may still lack the manpower for an all-out assault on Tripoli, but are hoping their encirclement of the capital will bring down Gaddafi's government or inspire an uprising. In the past, however, they have frequently failed to hold gains, and a fightback by Gaddafi troops could yet force them back.

Makhjoub Muftah, a school teacher who has signed up as a gun-toting pro-Gaddafi volunteer, like many others seemed to think a rebel advance into Tripoli was a remote possibility.

"I wish they would march into Tripoli. I wish," he said, daring the rebels. "They will all die."