Muammar Gaddafi was last tracked heading for Libya's southern border, the man leading the hunt for the deposed leader said. 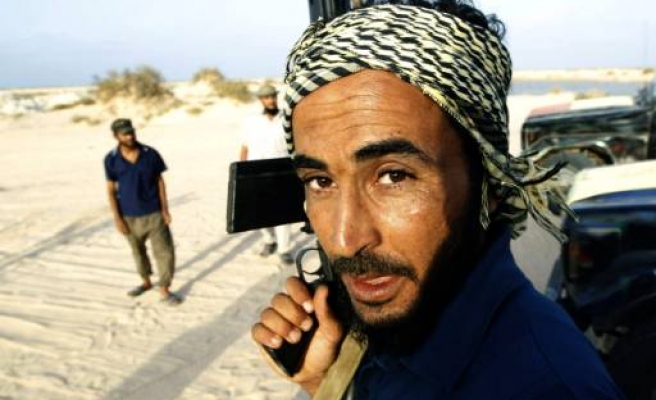 Hisham Buhagiar, who is coordinating efforts to find Gaddafi, said reports indicated he may have been in the region of the southern village of Ghwat, some 300 km north of the border with Niger, three days ago.

"He's out of Bani Walid I think. The last tracks, he was in the Ghwat area. People saw the cars going in that direction .... We have it from many sources that he's trying to go further south, towards Chad or Niger," Buhagiar said in an interview on Tuesday.

French and Niger military sources said a convoy of up to 250 vehicles was escorted to the northern city of Agadez by the army of Niger, a poor and landlocked former French colony. It might, said a French military source, be joined by Gaddafi en route to adjacent Burkina Faso, which has offered him asylum.

The United States said it believed the convoy was carrying senior members of Gaddafi's entourage and urged Niger to detain anyone liable for prosecution for alleged crimes committed during the uprising against the deposed Libyan leader.

U.S. Defense Secretary Leon Panetta said on Tuesday that Gaddafi was "on the run" but asked later on the Charlie Rose show if he thought he was still in Libya he said:

"You know, I don't know. I think he's been taking a lot of steps to make sure that in the end he could try to get out if he had to, but as to where, when, and how that'll take place, we just don't know."

Gaddafi's spokesman Moussa Ibrahim said he had not left.

"He is in Libya. He is safe, he is very healthy, in high morale," he told Reuters by telephone from an undisclosed location.

Anti-Gaddafi forces that overthrew the long-serving ruler two weeks ago said they also thought about a dozen other vehicles that crossed the border may have carried gold and cash apparently looted from a branch of Libya's central bank in Gaddafi's home town.

France, Niger and Burkina Faso, as well as Libya's new rulers and NATO, all denied knowing where Gaddafi was or of any deal to let him go abroad or find refuge from Libyans and the International Criminal Court (ICC), which wants to put him on trial for war crimes.

"To my knowledge, there have not been hundreds of vehicles that crossed into Niger," Niger's Interior Minister Abdou Labo told a news conference.

He did confirm reports that Gaddafi's security chief Mansour Dhao had been allowed to enter the country. He said this was on humanitarian grounds and that Dhao was the only Libyan official received.

A French military source said the 69-year-old Gaddafi and his son Saif al-Islam might join the convoy later to head for Burkina Faso.

Burkina Faso dismissed this, saying the former Libyan ruler had not requested exile and that there was no sign he was making his way to the West African state.

"We are not aware of his presence in Burkina...but if he arrives at our border we have our procedures," Burkina Faso Communication Minister Alain Edouard Traore told Reuters Television.

President Blaise Compaore, like Gaddafi, took power in a military coup and has run the country for 24 years.

NATO warplanes and spy satellites have been scouring Libya's deserts for months, raising the likelihood that any large convoy would have been spotted. But a spokesman for the Western alliance said it was not hunting Gaddafi and his cronies.

"Our mission is to protect the civilian population in Libya, not to track and target thousands of fleeing former regime leaders, mercenaries, military commanders and internally displaced people," Colonel Roland Lavoie said in a statement.

Niger's ambassador to the United Nations in Geneva, Adani Illo, told Reuters that surveillance over thousands of miles of desert was tough.

"The desert zone is vast and the frontier is porous," he said. "If a convoy of 200 to 250 vehicles went through, it is like a drop of water in an ocean."

Gaddafi has broadcast defiant messages since he was forced into hiding two weeks ago, and has vowed to die fighting on his own soil. But he also has long friendships with his poor African neighbours, with which he shared some of Libya's oil wealth.

The sources said the convoy, probably including officers from army units based in the south of Libya, may have looped through Algeria rather than cross the Libya-Niger frontier. Algeria last week took in Gaddafi's wife, daughter and two other sons, angering the interim council now ruling Libya.

NTC officials said Saif al-Islam may have escaped south into the desert, toward the southern, pro-Gaddafi bastion of Sabha and perhaps on to Niger. Tracking him would be hard; 1,300 km (800 miles) of sand separate Sabha from Agadez, with a further 750 km of road to travel to Niamey.

Though conditions in Tripoli were improving with the return of water supplies two weeks after rebels overran Gaddafi's headquarters compound, evidence of brutality during his battle to cling to power during the Arab Spring is also accumulating.

Reuters journalists in the provincial town of Khoms found evidence Muammar Gaddafi had deployed squads which held suspected opponents in shipping containers, tortured them for information and disposed of their bodies in unmarked graves.