Gaddafi loyalists hold out over holiday

In the capital, which fell to Western-backed rebels a week ago, people celebrated the end of the Muslim fasting month of Ramadan. 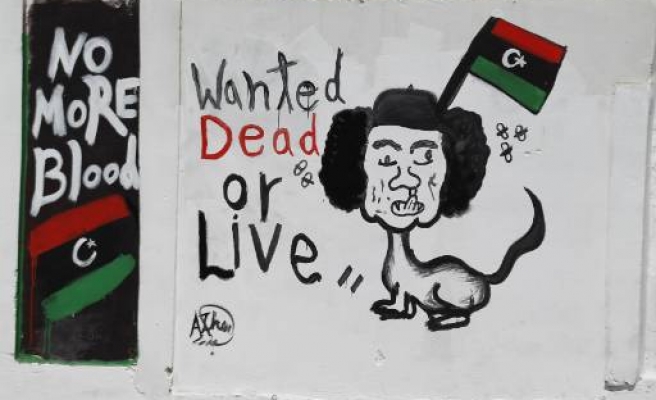 Loyal followers of Muammar Gaddafi are refusing to surrender to those who have forced him into hiding, raising the prospect of new fighting in Libya when an ultimatum expires after this week's Eid holiday.

Keen to consolidate its grip and relief hardships after six months of war, the new ruling council won a $1.55 billion cash injection when the U.N. Sanctions Committee released banknotes frozen in Britain in accounts once controlled by Gaddafi. And Libya may start pumping oil again in days, its leadership said.

In the capital, which fell to Western-backed rebels a week ago, people celebrated the end of the Muslim fasting month of Ramadan, mostly with delight at the end of 42 year's of one-man rule, even if shortages, cuts in water supplies and the hunt for diehard Gaddafi supporters kept festivities somewhat muted.

As darkness fell, the gunfire was, for a change, mostly in celebration, along with fireworks and car horns. Crowds were expected for dawn prayers on Wednesday at the central plaza known as Green Square when it was a showpiece for pomp under Gaddafi and now renamed Martyrs' Square by his enemies.

"This Eid is special. We have been scared," said 28-year-old Hana Mahdoub as she joined shoppers making festive purchases of clothing and sweets. "Now we feel there is security. We want our kids to celebrate with new clothes."

"There may be some pockets of Gaddafi forces but generally the capital is secure," interim interior minister Ahmad Darat told Reuters. "We have created a security team to manage the crisis and preserve security in the capital."

On the frontlines of a pincer thrust toward Gaddafi's coastal bastion of Sirte -- one of several places, including Tripoli, where his enemies think the might have taken refuge -- fighters for the interim ruling council paused, observing an effective ceasefire announced by their leaders until Saturday.

NATO warplanes have been bombing Gaddafi forces near Sirte, as the alliance has assured its Libyan allies that it will keep up its military drive from the air for an end to the conflict -- something the council leadership says will only be secured once Gaddafi is found, "dead or alive."

Council chief Mustafa Abdel Jalil, who as Gaddafi's justice minister until turning against him this year has had ample opportunity to observe the survival instincts of one of the world's longest ruling autocrats, warned again on Tuesday:

"Muammar Gaddafi is not finished yet," Abdel Jalil said in the council's eastern stronghold of Benghazi.

"He still poses a threat to Libyans and the revolution. He still has pockets of support in Libya and supporters outside Libya, both individuals and countries."

In the Sahara far south of Sirte, the town of Sabha is among those where the writ of the ruling council does not run.

It was across the desert that Gaddafi's wife and three of his children fled into Algeria. They arrived just in time for his daughter Aisha to give birth at the oasis of Djanet on Tuesday, according to Algerian officials who sought to soothe Libyan anger by insisting they granted refuge to the former first family out of concern for the expectant mother and in the traditions of hospitality entrenched in local nomadic culture.

Algiers, wary of any threat the Arab Spring movements might pose to its own veteran rulers and fearful that a post-Gaddafi Libya might be helpful to its Islamist enemies, is not among the four dozen or so countries to recognize the National Transitional Council (NTC) as Libya's legitimate government.

But, according to an Algerian newspaper, it has decided not to give asylum to Gaddafi himself and would hand him over, if he arrived, to the International Criminal Court at The Hague, which has indicted him, his son Saif al-Islam and his intelligence chief for crimes against humanity.

The whereabouts of all three are unknown, although council fighters said intelligence chief Abdullah al-Senussi had been killed at the weekend along with Gaddafi's son Khamis, a military commander. Both men had been reported dead before.

Ahmed Bani, a military spokesman for the council, again ruled out any negotiation with Gaddafi or his supporters and called on those holding out to give up quietly: "We will not negotiate with his murderers and the likes of him," he said.

"We are still hopeful there will be a peaceful proposal put forward before Saturday ... Zero hour is quickly approaching."

The week since Gaddafi's Tripoli compound was overrun may have eroded the conviction among many of his enemies that he was near at hand in the capital and close to capture, however.

"There are no confirmed reports of his movements, whether it be to Sirte or otherwise," Bani said. "But it's obvious the noose is tightening around him and sooner or later he will be captured or found."

Interim oil minister Ali Tarhouni, speaking in Tripoli, said: "We have a general idea where he is ... We have no doubt that we will catch him."

Many are conscious that Saddam Hussein evaded capture in Iraq for eight months, while an insurgency, partly in his name, took root. With long-prepared access to funds and some old favors to call in, Gaddafi could find refuge abroad.

George Friedman of U.S.-based risk advisers Stratfor warned it was premature to call the conflict over: "Gaddafi's forces still retain military control of substantial areas ... Gaddafi is still fighting and posing challenges. The war is not over."

He also noted concerns about the ability of the council to establish control of the country more generally.

Its leaders insist that, in the face of evidence of the killing and torture of prisoners by Gaddafi's forces, their own men are to treat their captives with respect in the interests of fostering cohesion in a country lacking many government institutions and long used to tribal and ethnic division.

"The council must do more to ensure that their fighters do not abuse detainees, especially the most vulnerable ones such as black Libyans and Sub-Saharan Africans," Amnesty's Claudio Cordone said in a statement after one incident in Tripoli.

"Many risk reprisals as a result of allegations that al-Gaddafi forces used 'African mercenaries' to commit widespread violations during the conflict," the lobby group added.

Interim interior minister Darat said he was hoping to build up new security forces to absorb some of the young fighters now roaming with weapons and would work to instill order: "Our goal is to implement justice for everybody, including Gaddafi loyalists," he said.

One important element in efforts to establish the council's rule as it prepares for a new constitution to be followed by elections will be a return of export profits from oil and gas.

Oil production could restart within weeks and reach full pre-war output within 15 months, the newly appointed chairman of the National Oil Corporation (NOC) said on Tuesday.

"Starting up production will be within weeks, not months. After we start it will take less than 15 months," Nouri Berouin, chairman of the NOC, told Reuters.