Gaddafi said to be in desert town: Libyan military

All three fugitives are wanted by the International Criminal Court for alleged crimes against humanity. 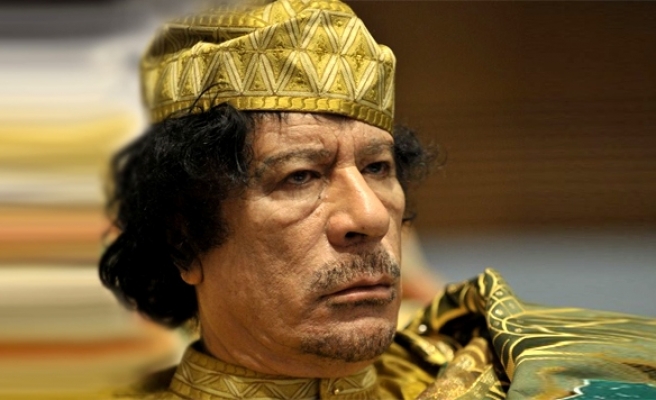 Muammar Gaddafi is in a desert town outside Tripoli planning a fightback, a Libyan military chief said on Thursday, as Libya's interim rulers conferred with world powers on reshaping a nation torn by 42 years of one-man rule and six months of war.

All three fugitives are wanted by the International Criminal Court for alleged crimes against humanity.

"They wanted to set up an operations room there and conduct aggressive operations against us," Mlegta said. "We have talked to notables from Bani Walid to arrest him and hand him over. They haven't responded. We are assessing our position."

He said Ali al-Ahwal, Gaddafi's coordinator for tribes, was also in Bani Walid, a stronghold of the powerful Warfalla tribe, Libya's biggest at about a million strong among a population of six million, but by no means solidly pro-Gaddafi.

"In four days we will come with up a solution. We are capable of ending the crisis but military action is out of the question right now," Mlegta said.

"We cannot attack this tribe because many of our brigades in Benghazi and Zintan are from Bani Walid. The sons of Bani Walid hold the key to the solution."

Fighters of Libya's National Transitional Council (NTC) said this week that they were 30 km from Bani Walid. The council has given pro-Gaddafi forces in the coastal city of Sirte until Saturday to surrender or face force.

The war may not be over until Gaddafi is killed or captured -- his wife and three of his children escaped to Algeria on Monday, irking NTC leaders -- but Libyans are keen to move on.

Russia recognised the NTC as Libya's new leaders gathered with their international partners in Paris to coordinate political and economic reconstruction 42 years to the day since Gaddafi, then a 27-year-old army captain, toppled King Idris in a bloodless 1969 coup.

While the conference is focused on rebuilding Libya, some participants will also be jostling for a share in postwar contracts in the wealthy North African oil and gas producer.

Russia abstained from a U.N. Security Council vote in March that allowed Western military intervention in Libya but then repeatedly accused NATO forces of overstepping their mandate to protect civilians and of siding with rebels in the civil war.

Some in Libya suggest that Tripoli may slight nations like Russia and China in favour of stalwarts of the intervention such as Britain, France, the United States and Qatar.

Iraq and Afghanistan, as well as Libya, showed what could go wrong if the world body is not driving international involvement in postwar rebuilding, the People's Daily said.

"Looking back at these three local wars since the start of this century, it's easy to discern a pattern: the United Nations gets involved quite quickly and early on, but (then) the United States and its NATO allies come to the fore and steadily push out the U.N.," it said.

Libya's interim rulers have ruled out any U.N. peacekeepers or observers, but are keen on U.N. help with setting up a new police force, a U.N. envoy for postwar planning said this week.

Eager to meet immediate civilian needs, the NTC is expected to push for rapid access to billions of dollars in foreign-held Libyan assets frozen under U.N. sanctions on Gaddafi.

The United States and Britain have won U.N. permission to unfreeze $1.5 billion each of Libyan assets and France has received approval for the release of 1.5 billion euros ($2.16 billion) out of a total 7.6 billion euros.

NATO air strikes hit several rocket launchers near Sirte on Wednesday, as well as an ammunition storage facility and a military command post near Bani Walid, a NATO spokesman said.

With the NTC's Saturday ultimatum looming, some civilians have fled from Sirte, fearing a bloody showdown, and Gaddafi's son Saadi began talking of a peaceful solution.

"We were talking about negotiations based on ending bloodshed," Saadi, whose whereabouts are not clear, said on al-Arabiya television on Wednesday, saying his father had authorised him to parley with the NTC.

"We must wage a campaign of attrition day and night until these lands are cleansed from these gangs and traitors," he said in a statement broadcast on a Syrian-owned TV channel.

"We assure people that we are standing fast and the commander is in good condition," Saif said, adding that there were 20,000 loyalist soldiers ready to defend Sirte.

With Gaddafi driven from power, the "Friends of Libya" conference in Paris gives the NTC its first platform to address the world. Its chairman, Mustafa Abdel Jalil, will outline plans for a new constitution, elections within 18 months and ways to avoid any descent into postwar Iraq-style bloodletting.

"We have to help the National Transitional Council because the country is devastated, the humanitarian situation is difficult and there's a lack of water, electricity and fuel," French Foreign Minister Alain Juppe said on RTL radio.

Tripoli has enough fuel for now and food is starting to get through, but there is no end in sight to its water shortage, according to the European Union's humanitarian office (ECHO).

Fuel at Zawiya refinery, 50 km west of Tripoli, appears to be enough to meet all of Libya's short-term transport and energy needs, said the report obtained by Reuters.

"The shortage of drinking water is the predominant problem even though the coping mechanisms of the population prove to be better than anticipated," it said.

Pro-Gaddafi forces have choked off Tripoli's water supply and water engineers have not yet managed to reach the pumping stations at Jebel Hassouna, 700 km (435 miles) south of the capital, which are now in NTC hands, the report said.

The 280 million Libyan dinars, officially worth about $234 million, is part of a consignment worth about $1.5 billion blocked by Britain in March after he cracked down on protests.