Muammar Gaddafi's sons clashed on the airwaves Wednesday, with one offering peace and another promising a 'war of attrition' as a final battle for control of Libya's coast loomed. 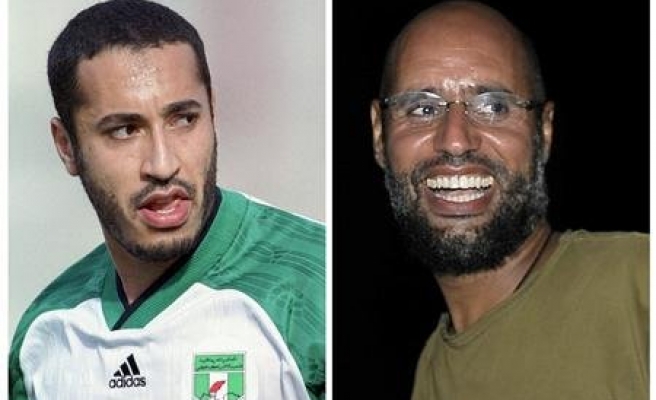 Muammar Gaddafi's sons clashed on the airwaves on Wednesday, with one offering peace and another promising a 'war of attrition' as a final battle for control of Libya's coast loomed.

The conflicting messages were the latest evidence that the fallen leader was losing his grip on what remains of his entourage after a six-month uprising left his 42-year rule of the North African nation in tatters.

NATO warplanes struck at loyalist troops dug in around his beseiged hometown of Sirte -- his last stronghold along the heavily populated Mediterranean seaboard-- and refugees streamed out fearing a bloody showdown.

A week after they overran the capital, forcing Gaddafi into hiding, irregular troops of the new ruling council have paused in a drive to take Sirte and Gaddafi strongholds in the desert, giving Sirte's defenders until Saturday to surrender. But frontline clashes continued, as did NATO air strikes.

"We were talking about negotiations based on ending bloodshed," Gaddafi's son Saadi said on al-Arabiya television, saying he had been given his father's blessing to negotiate with the ruling National Transitional Council.

The head of Tripoli's military council, Abdul Hakim Belhadj, told Reuters he had spoken to Saadi by telephone and had promised him decent treatment if he surrenders.

"We want to spare bloodletting, therefore negotiation and surrender is preferable," Belhadj said. "If this does not happen there is no other way except a military solution."

In a sign of turbulence within the Gaddafi clan, the former leader's better-known son Saif al-Islam hurled defiance at the NATO-backed forces and said the fight would continue.

"We must wage a campaign of attrition day and night until these lands are cleansed from these gangs and traitors," he said in a statement broadcast on the Syrian-owned Arrai satellite TV channel. "We assure people that we are standing fast and the commander is in good condition."

He said there were 20,000 loyalist soldiers ready to defend Sirte in the case of an attack.

Despite shortages and disruptions, people in Tripoli, Misrata, Benghazi and other cities took to the streets to celebrate the Eid al-Fitr holiday, a high point of the Muslim calendar marking the end of the Ramadan fast. For most Libyans, it was the first Eid they could remember without Gaddafi.

Anxious to aid -- and steer -- the new rulers of the country, and to consolidate their own victory over a man who has baffled and infuriated them for decades, Western governments will hold a "Friends of Libya" meeting in Paris on Thursday.

The date, Sept. 1, is laden with symbolism as the anniversary of Gaddafi's seizure of power in 1969.

Until the 69-year-old fugitive is hunted down, dead or alive, the transitional council's leaders say they will not count their country's "liberation" as complete.

But though there is much talk of closing in on Gaddafi and his sons, of tempting loyalists to betray them and of tracking their communications, it is unclear where the key figures are.

Hisham Buhagiar, a senior NTC official who is coordinating the hunt, told Reuters he believed Gaddafi was either in the Bani Walid area, southeast of Tripoli, or in Sirte, 450 km (265 miles) east of the capital.

The arrest in Tripoli on Wednesday of Gaddafi's foreign minister, Abdelati Obeidi, as witnessed by a Reuters journalist may provide more clues.

"We trace a lot of people who are not in the first inner circle with him, but the second or third circle. We're talking to them," said Buhagiar. "They want to strike deals. Everyone who helps us is on the white list."

Britain's ITV News reported that British special forces were helping in the hunt for Gaddafi. They believed he is still in Libya and has been denied entry to Algeria, where his wife and three of his children have taken refuge.

Troopers of the elite SAS, some working from ships off the coast, were using round-the-clock aerial surveillance to try to track him and his close supporters.

"When a target is identified, a Helicopter Assault Force moves in to capture the individual who will then be interrogated for further intelligence about Colonel Gaddafi's movements, the ITV report said.

While the threat of an Iraq-style insurgency led by those loyal to the old guard is clearly a worry to the new leaders, their international backers are also concerned that the NTC can overcome regional, ethnic and tribal differences across Libya.

There has been praise from abroad for its pledges of equality, fairness and willingness to bury past grievances, though there is also disquiet at evidence of harassment, and worse, by victorious fighters of some groups, notably black Libyans and African migrants, widely seen as allies of Gaddafi.

At Tawarga, where anti-Gaddafi forces are dug in and readying an assault on Sirte to the east, most of the residents were black African rather than Arab in origin and have recently fled -- apparently in fear of reprisals by fighters from the city of Misrata who see Tawarga as a pro-Gaddafi town.

Also fleeing their homes were hundreds of people from towns around Sirte, who streamed through a frontline checkpoint set up by NTC forces on the coastal highway at Tawarga.

"I need to take my family where it is peaceful," said one man named Mohammed, as laden vehicles flying white flags were checked for weapons. "Here there will be a big fight."

Ali Faraj, a fighter, said he doubted people in Sirte would willingly join the revolt: "There will be a big fight for Sirte. It's a dangerous city. It's unlikely to rise up," he said.

"A lot of people there support Gaddafi. It's too close to Gaddafi and his family. It is still controlled by them."

There is no independent confirmation of conditions in Sirte, which was developed into a prosperous city of 100,000 during the 42 years Gaddafi ruled Libya. NTC officials say power and water are largely cut off and supplies are low.

In Tripoli after dawn, worshippers packed Martyrs' Square, which was named Green Square in the Gaddafi era, chanting "Allahu Akbar (God is greatest), Libya is free".

Fighters on rooftops guarded against any attack by loyalists and sniffer dogs checked cars. Even the interim interior minister, Ahmed Darat, was searched.

Fatima Mustafa, 28, a pregnant woman wearing a black chador, said: "This is a day of freedom. I'm glad I haven't given birth yet so my daughter can be born into a free Libya."

Their interim leaders, trying to heal a nation scarred by Gaddafi's cruelly eccentric ways, may want United Nations help in setting up a new police force, but see no role for international peacekeepers or observers, a U.N. official said.

The NTC, keen to assert its grip and relieve hardship after six months of war, won a $1.55 billion cash injection when Britain's air force flew in new dinar banknotes to Benghazi. They had been printed in Britain but then held there by U.N. sanctions imposed on Gaddafi's government.