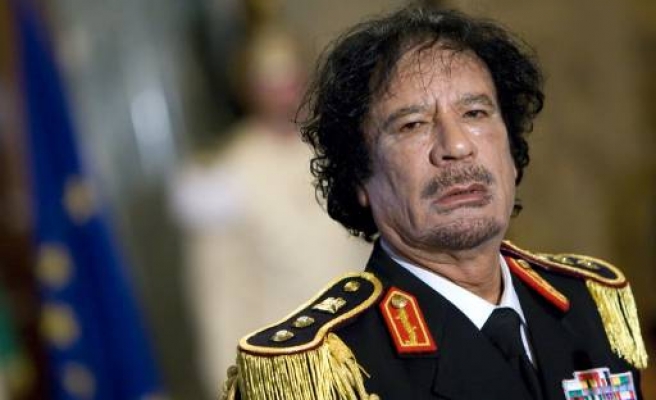 Deposed Libyan leader Muammar Gaddafi taunted NATO in a speech broadcast by a Syria-based television station on Tuesday, but the station gave no new clues as to his whereabouts or when the recording was made.

"The bombs of NATO planes will not last," Gaddafi said in the recording, played by Arrai television, which supports the ousted leader and has emerged as his sole outlet for recorded messages since he was toppled a month ago.

"The political system in Libya is a system based on the power of the people ... and it is impossible that this system be removed," Gaddafi said.

Arrai has broadcast several messages from Gaddafi since his Tripoli headquarters was overrun on Aug. 23. The channel did not say when or where the latest speech had been recorded and there was no direct evidence from the text indicating it was new.

Gaddafi's spokesman has said the ousted leader is still in Libya directing his followers. Gaddafi loyalists have tenaciously defended several towns from assaults by the new authorities backed by NATO air strikes.

Libya's interim government said on Tuesday its forced had seized the airport and fort in the town of Sabha in the remote Sahara desert, one of the last strongholds of Gaddafi loyalists.

Interim government forces are also battling Gaddafi loyalists in the town of Bani Walid southeast of Tripoli and in Sirte, Gaddafi's birthplace, on the Mediterranean coast.

Arrai said it had intended to show video footage of Gaddafi but was unable to do so for "technical reasons". The channel's Iraqi owner Mishan Jabouri, who presented the latest recording, said he would air a televised speech by Gaddafi "very soon".