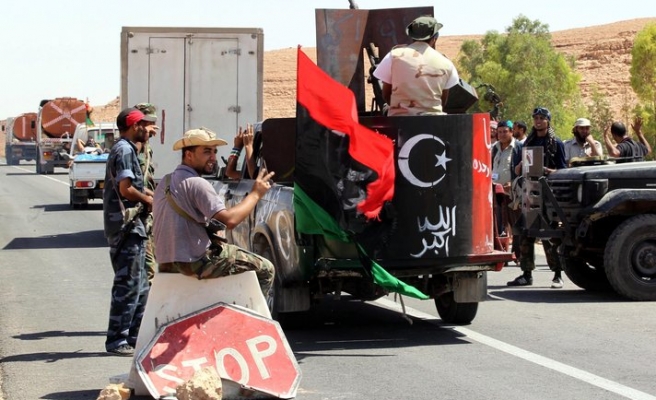 Libyan transitional forces besieging a bastion of forces loyal to Muammar Gaddafi on Tuesday gave residents two days to leave before a threatened onslaught, and fears rose for the fate of civilians trapped in the last redoubts of the fallen strongman.

Forces of the new ruling National Transitional Council (NTC) that overran Tripoli on August 23 have met unexpectedly stout resistance in five days of fighting for the town of Bani Walid 180 km (110 miles) southeast of the capital.

Along with Gaddafi's hometown Sirte on the central Mediterranean coast and Sabha in the remote southern desert, Bani Walid counts among the last strongholds of old regime fighters and their resistance has impeded NTC efforts to normalise life in the oil-producing North African state again.

Residents fleeing the town have reported days of intense firefights, and NATO warplanes were backing up NTC fighters with air strikes on pro-Gaddafi rocket positions.

Families trapped there for weeks started to slip out after Gaddafi forces abandoned some checkpoints on the outskirts, and dozens of cars packed with civilians streamed out of the area on Monday and Tuesday.

NTC field commanders said people in Bani Walid, dominated by a tribe, the Warfalla, that was a pillar of Gaddafi's rule, had been told via broadcast radio messages they had two days to leave town before it would come under full-blown attack.

"I think only 10 percent of the people are Gaddafi supporters. They are fanatics. And the rest are waiting to be liberated. We have given them two more days to leave the city," NTC fighter Abumuslim Abdu told Reuters.

The United Nations said it was worried about the plight of civilians marooned inside besieged pro-Gaddafi towns.

"Our big concern right now is Sirte, where we are receiving reports that there's no water and no electricity," U.N. humanitarian chief Valerie Amos told Reuters in Dubai.

Some NTC combatants said they suspected local fighters of the Warfalla tribe, Libya's largest, were passing tips to Gaddafi forces in Bani Walid. "We believe there are traitors among them," said Mohammed el Gahdi, from the coastal city of Khoms.

"When our forces entered Bani Walid they found the brigades of Gaddafi using citizens as shields," he said, adding that missile launchers had been placed on the roofs of homes, making it difficult for NTC forces or NATO warplanes to strike.