Brandishing an automatic rifle and wearing a military uniform, he said: "Brothers, you need to enter Tripoli today by force." 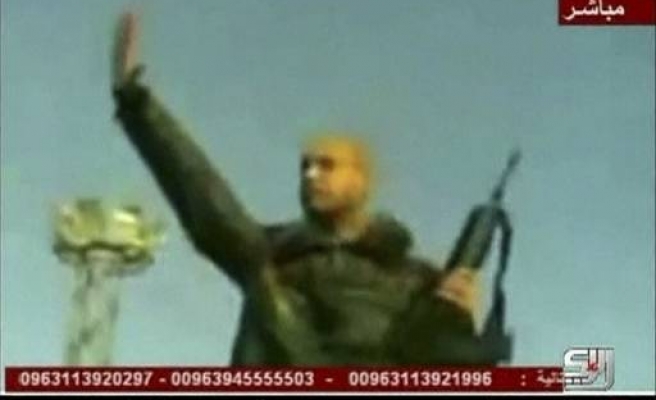 A television station broadcast footage dated Sept. 20 of what it said was Muammar Gaddafi's son Saif al-Islam apparently rallying his forces in one of the last strongholds of the Libyan leader.

"This land is the land of your forefathers. Don't hand it over," Saif al-Islam shouted to a crowd of followers in an unidentified location, according to the footage broadcast by Arrai TV on Tuesday.

Saif al-Islam has not been seen in public since the Libyan capital Tripoli was overrun by rebels in August.

Brandishing an automatic rifle and wearing a military uniform, he said: "Brothers, you need to enter Tripoli today by force."

It was not immediately possible to verify the footage.

It was the first time that Gaddafi's son, who is wanted by the International Criminal Court to face charges of crimes against humanity, had been seen in public since footage of him was broadcast on Aug. 23, soon after rebels announced they had captured him.

"I am off now, but I will send you weapons," Saif al-Islam could be heard saying to his followers. A crowd could be heard reciting a traditional chant: "God, Muammar and just Libya".

Muammar Gaddafi has been in hiding since fighters trying to end his 42-year rule seized control of the capital last month.