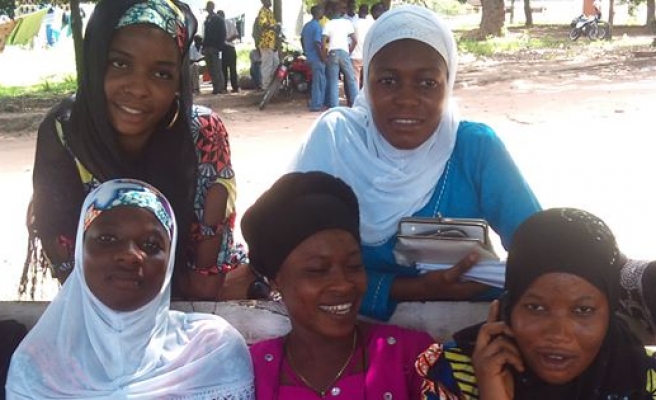 World Bulletin / News Desk
Ghanaian Muslims have welcomed a recent presidential directive emphasizing the citizen's right to freedom of faith as spelled out in the national constitution.

"It's like our prayers have finally been heard," Kausar Mohammed, a nursing student, told The Anadolu Agency.

"It's good because it will help us practice our faith," he said.

In his annual state-of-the-nation address on Thursday, President John Mahama reiterated his commitment to Article 21 of the constitution, which guarantees citizens the freedom of religion and the freedom to express their religious beliefs.

"Heads of institution must note this for strict compliance," he warned. "Appropriate sanctions will be taken against any head of institution who acts contrary to constitutional provisions."

Prior to the president's directive, many female Muslim high-school students – and female Muslims working in the public sector – had been forced to take off their veils.

The issue was more pronounced at missionary schools and nurse-training colleges.

Therefore, the president's speech came as a relief for Kausar, who says seeing her colleagues humiliated for wearing the veil deterred her from wearing one herself.

"Growing up wearing a veil everywhere you go and then going to a tertiary institution and there's a law that you have to remove the veil – you feel like you've been cheated," she told AA.

"Everybody is used to you wearing the veil; then, people see you one morning going to work with your hair uncovered," she added bitterly.

"You feel like you are naked because your uniform is short and you're not dressed like a Muslim lady," she lamented.

The president's speech was also music to the ears of Sadia Isaaka, a student nurse at the government-run Ridge Hospital in Accra.

"I have received a [phone] text that it is OK for us to wear the veil," she told AA jubilantly.

"I will go for clinicals next semester. I will try wearing my veil and see what happens," said Isaaka.

She has had bad experiences in the past wearing her hijab to the hospital.

"Once I wore the veil to work and our supervisor said she didn't ever want to see it again," she recalled.

The supervisor had told Isaaka, the student said, that her hijab was "not part of nursing ethics."

"She said it in front of people. I felt really bad, but I didn't have a choice," she recalled. "Being a Muslim, you can't dress in your uniform with your veil. As soon as you enter the ward you have to take the veil off."

According to a 2010 population census, 71.2 percent of Ghana's population is Christian, while Muslims account for some 17.6 percent of the populace.

"I am very happy. It means we have our future in our hand and the law is in our favor," he told AA.

Husseini hopes the president's speech will change the public perception regarding the challenges faced by Muslims.

"We hope all Ghanaians will understand that this issue [anti-Muslim discrimination] is real and that we must confront it as a people," he said.

"Every morning, you are forced to attend church service. If you fail, you are fined a maximum of 20 Ghanaian cedi [roughly $6]," he fumed.

"If you're in school to acquire knowledge, do you have to go to church to acquire this knowledge?" Husseini asked.

He lamented that many educational institutions in the country did not provide places of worship for Muslim students.

"Some students have a place of worship, but they are not permitted to erect a building. So they worship under the scotching sun, and when it rains it becomes difficult for them to observe their daily prayers," he said.

The student leader noted that female Muslim students were not allowed to wear veils while at the schools' boarding houses.

"You live at home as a Muslim girl and you always wear a hijab. Then you enter a senior high school and you're asked to wear a very short dress and you can't wear a veil," he said.

Husseini is cautiously optimistic that the president's speech will help end these malpractices.

"While jubilant over the statements made by the president, we also worry about statements from the implementers of state policy on education, the Ghana Education Service," he told AA.

"The important thing for us is that we have the law on our side and that we can wear the hijab without any fear or favor," the student leader asserted.

The Muslim caucus in Ghana's House of Parliament has long advocated for Muslims' religious rights.

"If care is not taken, we will destabilize the peace… because if you are going to force others to believe what you believe, this is a breach of the constitution," lawmaker Mohammed Muntaka Mubarak told AA.

"We don't want a situation where there will be a confrontation," he added.