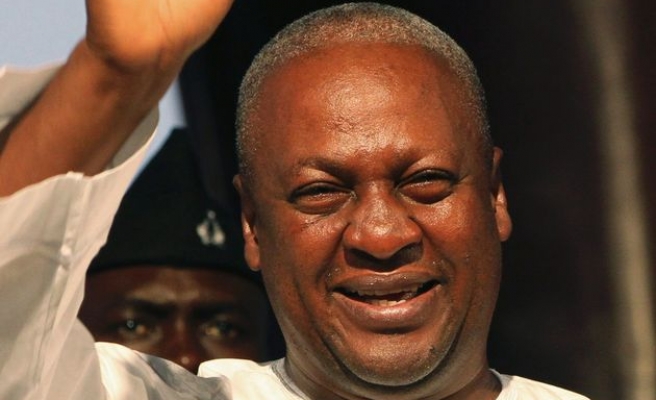 Ghana President John Dramani Mahama said on Friday that a deal his country is hashing out with the International Monetary Fund could help it by improving its image with foreign investors.

He said his economic team had come up with solutions the West African cocoa, gold and oil producer's main economic issues: a yawning deficit, rising inflation and a weakening currency. But he said the plan required the IMF stamp of approval to reassure global markets.

"You need a school master with a stick supervising you to make sure you do your homework. So we are looking at this IMF program," Mahama told an audience at Harvard University in Cambridge, Massachusetts.

"The marketplace is unforgiving. We came up with a fiscal consolidation policy. A fantastic document. I believe in that document. Yet we can't get the backing from anywhere. So what do you do?" he said.

He said he hoped the deal for financial assistance, which is still under negotiation, would improve Ghana's credit after ratings agencies cut it over the past three years. Ghana hopes to start the three-year IMF program in January.

The International Monetary Fund said on Friday that Ghana's fiscal deficit will end the year at 9.75 percent of gross domestic product, missing a government projection of 8.8 percent, and that imbalances could pose a threat to growth.

Ghana's commodities exports had made it one of Africa's fastest growing economies. But its expansion is undermined by escalating inflation, budget overspending, a currency that has fallen sharply this year and low foreign exchange reserves.

Mahama said many of Ghana's economic problems, including its heavy dependence on agricultural imports, could be traced back to IMF economic prescriptions from the 1980s, but he said both Ghana and the IMF had learned from their mistakes.

He added that the Ebola outbreak affecting West African neighbors was also having a negative impact on the economy by postponing some projects and reducing travel into the country. But he said he was hopeful the outbreak would be brought under control within a year.

Ghana's economy will slow to 4.5 percent growth this year from 7.1 percent in 2013 and international currency reserves will remain low despite inflows from a $1 billion Eurobond and a $1.7 billion cocoa loan this month, according to the IMF.