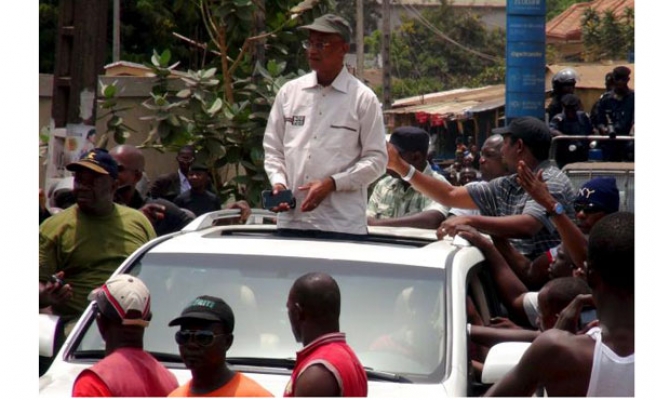 Guinea's opposition leader pledged to continue the protests in which at least four people have been killed unless President Alpha Conde allows prompt local elections.

Cellou Dalien Diallo said Conde had broken a 2013 U.N.-brokered deal with the opposition to organise long-overdue municipal polls before a presidential vote set for October.

The opposition accuses Conde of packing local authorities with his supporters after the five-year mandate of elected officials expired in 2010. Diallo said those officials are campaigning on Conde's behalf, making fair elections impossible.

Before talks with Diallo on Wednesday, the president has ruled out holding local elections before October, citing a decision by the Independent National Electoral Commission (CENI) that doing so would require postponing the presidential vote.

Recent protests have sparked fears of a return to the violence of 2013. More than 50 people were killed then before legislative elections in which Conde's RPG failed to win a majority. The violence deterred investors from the Guinea, a former French colony of 12 million people and the world's largest bauxite exporter.

"We will carry on with our demonstrations because it is illegal what Conde is doing and it is unfair," Diallo said in a weekend interview. "I will tell him that this electoral calendar violates the constitution ... and the electoral code."

Diallo has alleged fraud in the 2010 presidential election - Guinea's first democratic vote since independence from France in 1958 - after he won 44 percent of the vote in the first round only to see Conde snatch a surprise victory in the runoff.

"This time, the parties of the opposition will support whichever opposition candidate reaches the second round ,because we're all fighting for change," Diallo said, adding that he was determined to win October's vote.

The opposition protests were being fuelled by frustration over stagnant growth, high unemployment, crumbling infrastructure and graft, Diallo said.