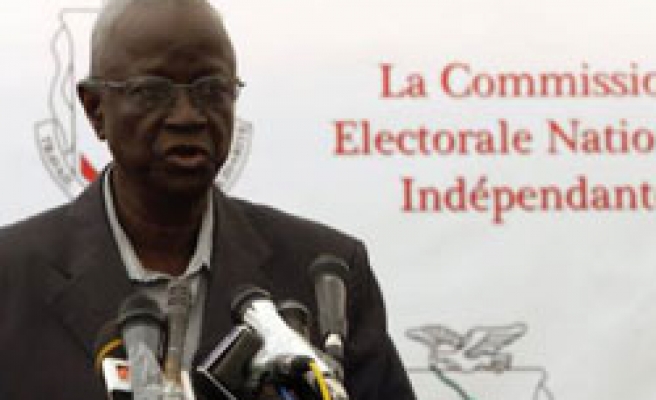 Street battles left one dead and 50 injured this week as rival political camps traded accusations of attempted vote-rigging, while turmoil within the election body itself had made a delay to Sunday's poll look increasingly inevitable.

Election officials emerging from hours of talks in the capital Conakry blamed the postponement on a lack of necessary voting equipment and said it could take up to two weeks for arrangements to be in place.

"This is a hope that has been unfulfilled, an important opportunity that has gone by the wayside," junta leader Sekouba Konate, who has won international plaudits for his decision to relinquish power, told national television.

Foumba Kourouma, a member of the election commission CENI, said authorities would continue talks on Thursday to determine when the election run-off could be held.

Former prime minister Cellou Dalein Diallo's camp had insisted the run-off must take place on time, while his rival Alpha Conde says several conditions must be met before a fair poll can be held.

"We know it is going to be postponed given the delays in the provision of the necessary equipment," a source close to Diallo said just before Konate confirmed the delay.

A source close to negotiations between CENI and the two rival camps over arrangements for the run-off vote said 1,250 new voting stations were due to be installed. The credibility of June's first-round vote was marred by reports of voters having to travel 30 km (20 miles) to cast their ballot.

Conde scored 18.25 percent in the first round, while Diallo took 43.69 percent, short of the majority needed for victory.

Conde and Diallo come from Guinea's two largest ethnic groups, the Malinke and Peul respectively, and there is a risk that clashes between the two could unsettle fragile neighbours such as Liberia and Sierra Leone with similar ethnic mixes.