More than 6 million Haitians, almost 60 percent of the population, live on two dollars a day, according to a recent World Bank report. 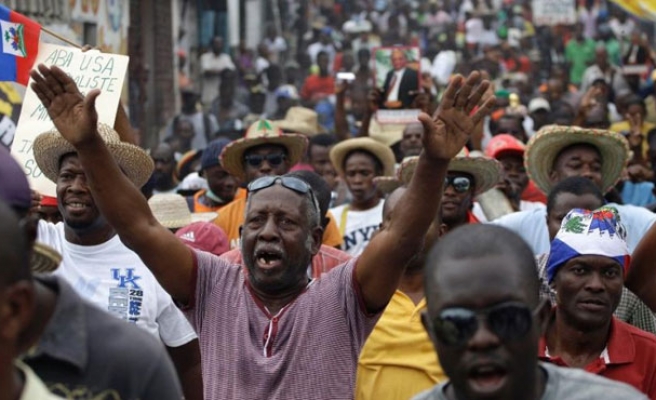 Anti-government street protesters plan to shut down Haiti's capital for two days starting Monday as the country plunges deeper into political and economic crisis even as many prepare for the annual Carnival, normally a time of peaceful revelry.

Protest organizers are warning residents of the capital to stay off the streets during the two-day strike over gasoline prices saying those who venture out will be risking their lives.

Prime Minister Evans Paul made an appeal for calm via Twitter on the weekend and said the government would guarantee security.

The impoverished Caribbean nation is in the midst of a political crisis after the previous prime minister was forced to resign in December and parliament was dissolved over the failure to hold municipal and legislative elections.

The U.S. State Department and the United Nations peace keeping force in Haiti have so far stood by Martelly, praising his efforts at compromise, and has called on all sides to agree to hold the overdue elections.

During the latest protest on Saturday, marking the 29th anniversary of the overthrow of the dictatorship of Jean-Claude 'Baby Doc' Duvalier, several thousand protesters marched in Port-au-Prince to demand the departure of Martelly and lower gasoline prices.

During five hours of demonstrations near the city center protesters threw rocks and blocked streets with burning tires. They were dispersed by police using tear gas who prevented them reaching an area near the presidential palace where the three-day Carnival is due to be staged starting Feb. 15.

"Today, we have a spiritual son of Duvalier in power, who has done everything to shut down parliament. We're giving a lesson of democracy to Martelly ... to show him we are not accepting the return of dictatorship," said Assad Volcy, one of the leaders of the protest movement.

More than 6 million Haitians, almost 60 percent of the population, live on two dollars a day, according to a recent World Bank report.

"We are asking for gasoline prices to be reduced to 100 gourdes ($2) a gallon," Volcy said.

Haiti's government badly needs to raise cash from the sale of gasoline to pay off its mounting fuel debt with Venezuela's preferential PetroCaribe program which has ballooned to about $1.5 billion.

"The government wasted money in ineffective social programs and now they are asking us to pay the bill. Only the poorest are paying taxes, the wealthy ones are not giving anything," Volcy added.