Columns of grey smoke billowed over the area and gunfire and occasional explosions rang out, a Reuters correspondent said. 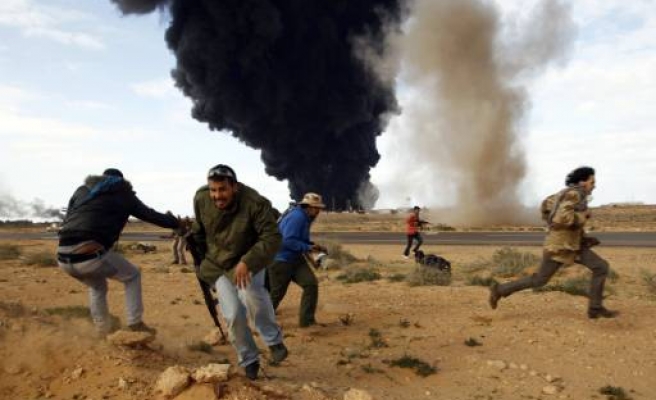 Heavy fighting raged around the fortified compound of Libyan leader Muammar Gaddafi in Tripoli on Tuesday, a Reuters correspondent said.

Columns of grey smoke billowed over the area and gunfire and occasional explosions rang out, he said.

"We hope this over soon. I fear that the violence will continue until Gaddafi and his family have left the country," said one bystander, Omar, an unemployed engineer.

Fighting could also be heard near the hotel housing foreign journalists.

Heavy artillery fire could be heard since mid-morning in the vicinity of the Rixos hotel.

It was not clear how close the fighting was but some it seemed to be crossing the area and had shaken the hotel, a Reuters reporter in the hotel said.

Journalists had been told by Libyans present at the hotel that it was surrounded by thousands of soliders, she said.

Shops in the capital were closed, with rubbish piled up in the streets, the walls daubed with pro-rebel graffiti and the red, green and black rebel flags few from several buildings. Groups of men and boys hung around shouting rebel slogans.