Rising grain, meat and sugar prices pose a threat to the nearly one billion people who are undernourished. 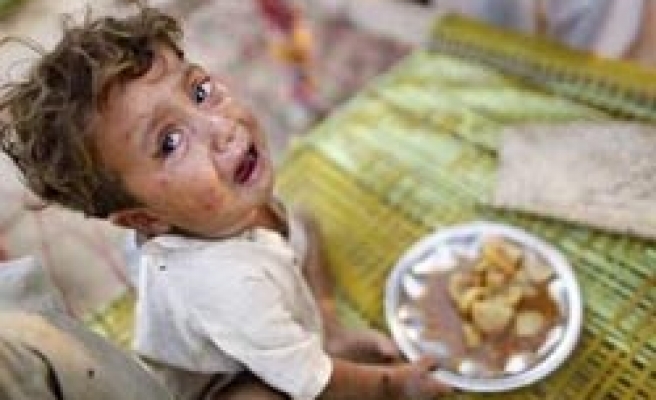 Rising grain, meat and sugar prices pose a threat to the nearly one billion people who are undernourished, with global hunger still above pre-economic crisis levels despite the first decline in 15 years in 2010.

"The recent increase in food prices, if it persists, will create additional obstacles in the fight to further reduce hunger," the United Nations Food and Agriculture Organization said in a report on Tuesday.

The FAO estimates that 925 million people are undernourished in 2010, a decline from 1.023 billion in 2009 due to a more favourable economic environment, but still higher than before the economic crisis of 2008/09.

The number of hungry people in the world had been rising for more than a decade, reaching a record spike in 2009 triggered by the economic crisis and high domestic food prices in several developing countries.

"Food prices in most low-income, food-deficit countries remain above the pre-crisis level, negatively affecting access to food by vulnerable populations," the FAO said.

Riots in Mozambique earlier this month in which 13 people were killed, showed the potential dangers for governments if food prices start to rise.

A 30 percent rise in the price of bread -- linked to soaring global wheat prices -- had to be quickly reversed.

Despite some pockets of instability, the FAO has repeatedly said the latest bout of price rises in some key staples has not brought markets closer to a repeat of the 2007/08 price-induced food crisis. It said this was because there have been two years of plentiful crops around the world and the situation on global markets remained different.

Russia's worst drought in more than a century sparked a searing rally in global benchmark wheat prices and now livestock producers are likely to pass on the higher cost of feeding their animals to consumers.

"The rise of meat prices this year is unavoidable. We hope that the situation will be limited to 10-15 percent ... by the end of the year," Cherkizovo's chief executive officer Sergei Mikhailov told the Reuters Russia Investment Summit on Tuesday.

Global wheat production looks set to fall this year but a rise in stocks following the two largest wheat harvests in history in 2008 and 2009 should help to keep a lid on prices.

"Global grain stocks are actually at relatively comfortable levels having been built up following record harvests over the past two years, and this should allay fears of an outright food scare," Jonathan Blake, manager of the Baring Global Agriculture Fund said on Tuesday.

Corn prices have been supported by concerns yields in the United States, by far the biggest global producer, may fall short of expectations.

In its September supply/demand report on Friday, the U.S. Department of Agriculture (USDA), reduced its yield forecast for U.S. corn this year to 162.5 bushels per acre from its August estimate of 165.9 bushels.

Sugar prices are also on the rise, climbing to the highest levels in more than six months on Tuesday buoyed by worries drought will erode yields in Brazil, the world's top producer and exporter, into next season.