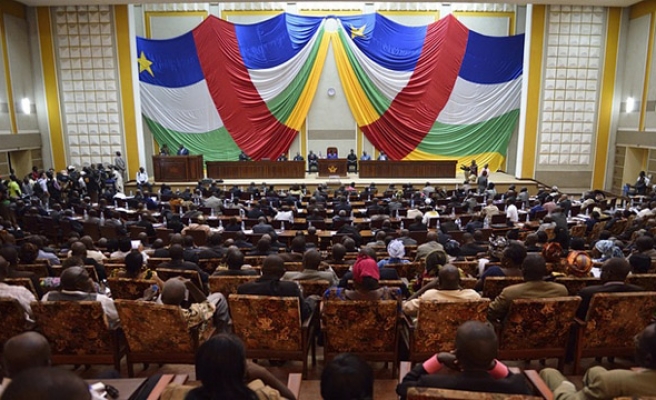 The newly-appointed head of UN mission in Central African Republic believes that the sectarian strife-hit country can return from the brink by holding elections soon, especially if its former tainted heads of states stay out of it.

Parfait Onanga-Anyanga, head of the United Nations Multidimensional Integrated Stabilization Mission in the Central African Republic (MINUSCA), told Anadolu Agency in an interview that the UN mission in the country will ensure safe and secure elections in the coming months.

Presidential election in the state was slated for October, but it got delayed due to the transitional government’s inability to safeguard the polls.

Onanga-Anyanga now hopes elections will take place in the near future, possibly by the end of 2015 or early 2016.

“It is obvious that the country has made remarkable progress, the transition is coming to an end. In a few months, the country will begin an important electoral process that will result in the election of new legitimate authorities,” he said.

He urged Central African people to participate in the democratic process despite all their difficulties.  “The issue of securing the elections is a priority of our mission. We are working hard with the transition authorities,” he said.

He also hoped the armed groups would cease their hostilities.

“The armed groups that have signed agreements to cease hostilities must engage in a process of disarmament to enter a political process.”

About the rehabilitation of Central African Armed Forces (FACA), which was dissolved in March 2013, before the presidential election, Onanga-Anyanga said: “No! The FACA was not a republican army”.

He added that the army needs to be reformed. “The central African army should be representative and ethnically balanced…particular emphasis [must be put] on respect for human rights,” he said.

About the possibility of CAR´s two former head of states, Francois Bozize and Michel Djotodia, meeting the UN in a step towards reconciliation, Onanga-Anyanga said: “They are indirectly responsible for the chaos across the country…I find this absolutely unacceptable. In these conditions, you understand that it would be impossible for an institution like ours that aims to promote peace and stability to sit down with these people. It is unfortunate that some people continue to believe that they are important figures”.

About the investigations into sexual abuse cases involving UN peacekeepers in Central African Republic, Onanga-Anyanga said that such acts were “absolutely unacceptable and any act of this kind will be denounced and punished”.

“We will do everything to protect the victims; we are working with other UN agencies to ensure that these victims receive all the care and the attention they deserve,” he added.

Onanga-Anyanga was appointed head of the UN mission on August 14, replacing the Senegalese Babacar Gaye, who resigned the same month following rape allegations against UN peacekeeping forces in the Central African Republic.

On September 26, violence resumed in the central African state after a Christian neighborhood was attacked by Muslim Seleka militiamen supposedly in revenge for the reported death of a Muslim man.

According to Onanga-Anyanga, the perpetrators of the September 26 violence wanted to harm the transitional institutions, but they failed. “Violence has actually decreased,” he claimed.

However, sources say violence is ongoing across the country since late September. At least five people were killed on Monday in new clashes in Bambari town, local administrative sources told Anadolu Agency.

Violence erupted in the Central African state in 2013, when Muslim Seleka rebels ousted then President Francois Bozize, a Christian who had come to power in a 2003 coup. The rebels then installed Michel Djotodia, a Muslim, as the interim president.

Djotodia stepped down in early 2014 to be replaced by current President Catherine Samba-Panza – a Christian – amid a wave of sectarian violence between the two communities.

In May of this year, following months of deadly violence between the Christian anti-Balaka militia and Seleka fighters, both groups agreed to lay down their arms. However, both sides have ignored the peace deal and continue to attack each other repeatedly.

Amnesty International in one of its recent reports estimated that more than 5,000 people, majority of whom were civilians, died in sectarian violence in the Central African Republic despite the presence of international forces.