Kenyans voted in droves in a referendum on a new constitution as changes are seen as important to avoid a repeat of the post-election tribal bloodshed. 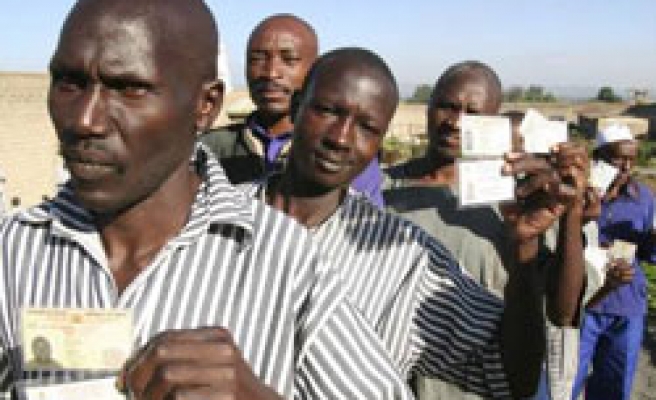 Kenyans voted in droves in a referendum on a new constitution on Wednesday, a poll seen as a test of democracy after disputed 2007 elections and one that could reshape the politics of east Africa's largest economy.

The constitutional changes are seen as important to avoid a repeat of the post-election tribal bloodshed in early 2008 that killed 1,300 people and took the country of about 40 million people to the brink of anarchy.

They address the corruption, political patronage, land grabbing and tribalism which have plagued Kenya since it won independence in 1963. The changes allow for greater checks on presidential powers, more devolution to grassroots administrations and an increase in civil liberties.

There were long queues at polling stations across the country, especially in the Rift Valley centres of Eldoret and Nakuru that were at the epicentre of the post-election violence.

Most Kenyans are expected to vote in favour of the new constitution, according to surveys.

William Ruto, a cabinet minister based in the Rift Valley who is leading "No" campaigners angry with clauses related to land ownership, said he would accept the outcome.

"This is a historic moment in our country and I'm sure Kenyans will make the right decision," he told reporters in his constituency. "Everyone has an obligation to accept the decision of the people of Kenya."

A previous attempt to change the constitution through a referendum in 2005 failed. To be adopted, the law requires a majority of 50 percent plus one vote of the ballot cast nationally and at least 25 percent of the votes in five of Kenya's eight provinces.

Kenyan shares rallied strongly for the fifth straight session on Tuesday, driven by expectations the law will be adopted, while the shilling rose against the dollar.

Markets were closed for the voting on Wednesday. Traders and analysts say investors would take great confidence from the peaceful passage of the constitutional changes into law.

As voting kicked off at 6 a.m. (0300 GMT), a queue several hundred metres (yards) long snaked away from a polling station on Moi Avenue in the heart of the capital Nairobi. A few hours later it had grown even longer.

At the sprawling Kibera slum in Nairobi, another hotspot of post-election violence, voting was peaceful three hours after stations opened. There were long lines with many elderly women being helped by officials to the front of the queues.

In Eldoret and Nakurau, some voters said they hoped the referendum would usher in a new era of peaceful democracy.

"I decided to come and vote for the new constitution because I believe it is going to guarantee me security in Rongai where we have suffered for so long," said 76-year-old Helen Gathoni, who was voting in the Rift Valley centre of Nakuru.

"In 2008, I lost my husband Mwangi Njoroge and all our property to raiders. I believe this is going to end."

The country's electoral authority said on Tuesday the process would be more transparent than in the 2007 election, when allegations the poll was rigged in favour of President Mwai Kibaki led to the bloodletting.

Kibaki assured the country that security had been strengthened at polling stations to prevent any violence.

"We have now come to a defining moment in our nation's history, Kibaki said in a television and radio address on Tuesday, encouraging Kenyans to vote to "determine the destiny" of their country.

Some 12.5 million people have registered to vote. Polls close at 5 p.m. (1400 GMT), with results expected to be published at some point on Thursday.

Philippe de Pontet, Africa analyst at Eurasia Group, said in a research note that there appeared to be broad support for the new constitution.

"The 'No' camp's efforts to tie the document to controversial social issues like abortion have mobilised opposition from some church groups, but the 'Yes' camp has a broader regional and ethnic coalition," he said.

"Voter approval of a new constittion in a national referendum on 4 August will provide a short-term boost for the coalition government."

The new charter was a key provision in the power-sharing deal struck between then-rivals Kibaki and Prime Minister Raila Odinga to end the violence that followed the election in 2007.

On the eve of the vote, tribal tensions in parts of the Rift Valley, which was hard hit by the clashes, prompted some residents to flee their homes. But a rights group said the chances of chaos were lower this time.

"When you want to know if violence will break out, you want to look at secret meetings between politicians and implementing agents. These have not been happening," Ken Wafula, head of the Centre for Human Rights and Democracy, told Reuters in Eldoret.

"I don't think there's too much to get us worried."