Hollande urged Burkina Faso's transitional authorities, mandated to guide the West African nation to elections next year, to concentrate on reconciliation and to avoid settling scores 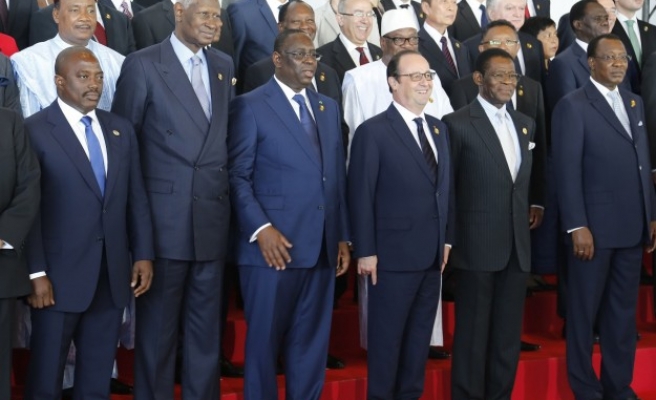 French President Francois Hollande warned African leaders on Saturday against trying to hang on to power, praising peaceful political transitions in Burkina Faso and Tunisia as positive examples to the continent.

Addressing African heads of state at the opening of a two-day summit of Francophone nations in the Senegalese capital Dakar, Hollande also said that France would continue to support regional efforts to fight militants.

Massive street protests toppled Burkinabe President Blaise Compaore in late October when he attempted to push through constitutional change to prolong his 27-year rule. His overthrow spurred talk of an 'African Spring' in the image of the uprisings in several Arab nations.

"The example of Burkina Faso should give a pause for thought to those who would like to stay in power by violating the constitutional order, as it is the people who decide what is legitimate and what is not," said Hollande.

Hollande urged Burkina Faso's transitional authorities, mandated to guide the West African nation to elections next year, to concentrate on reconciliation and to avoid settling scores with members of Compaore's regime.

Hollande took the stage shortly after a speech by Democratic Republic of Congo's President Joseph Kabila, who opponents accuse of seeking to stay on after his second and final term expires in 2016. Kabila has declined to comment.

A member of the Congolese delegation said Western nations should let Africa undertake political change in its own way.

"Burkina is not a model for other countries. Each country has its own reality and it is nuanced," Collin Kandolo told Reuters. "The French president is president of France and not of Congo and that needs to be respected."

Hollande also lauded Tunisia - which will complete a democratic transition with the second round of presidential polls next month - as a successful example of the Arab spring.

Outgoing Tunisian Prime Minister Mehdi Jomaa told Reuters that the conclusion of the peaceful transition and the formation of a new government should encourage a return of foreign investment in key sectors such as agriculture and tourism.

In the wake of an attack by suspected members of Boko Haram that killed more than 100 people at a mosque in northern Nigeria on Friday, Hollande expressed his condolences to the victims and pledged support.

"We must together, now and forever, fight against terrorism," he said. France has some 3,000 troops deployed in Operation Barkhane battling militants in the Sahel.

Cameroonian President Paul Biya called for greater African solidarity in fighting the militants in northern Nigeria, which borders the west of his own country. Cameroon has sent hundreds of troops to battle Boko Haram in the border region.

Meanwhile, Senegalese authorities on Saturday barred a peaceful protest and a musical concert against the 15th Francophonie Summit, which has kicked off in the Senegalese capital Dakar earlier in the day.

The authorities cited the lack of security for preventing the protest and the musical concert.

According to Dakar Governor, Alioune Badara Diop, the protest and the musical concert would have been organized by a group of activists opposing the summit, which will address a number of pressing issues, including the global threat of Ebola and the situation in countries, facing crises.

Diop said the activists belonged to the National Salvation Front, which is made up of a number of civil society organizations and local politicians.

The organizers of the summit, meanwhile, said it was a mere "scam."

"It is a continuation of a colonial strategy that seeks to exploit our natural resources and form a political elite that receives its orders from the Elysee Palace [the presidential palace in France],"  Noel Seck, the coordinator-general of the National Salvation Front, said.

The 15th Francophonie Summit started in Dakar earlier on Saturday in the presence of around 35 heads of state and delegation leaders.

A source affiliated with the summit told AA earlier that the gathering, which is held every two years, would look into the desire of some states to acquire full membership in the International Organization of La Francophonie (IOF).

He added that the gathering would also define Francophone trends in the context of a long-term strategy.

A new IOF secretary-general will be elected during the summit to replace former Senegalese president Abdou Diouf, who held the post for three consecutive four-year terms.

Canadian politician Michaelle Jean and Congolese diplomat Henri Lopes are the frontrunners for the post.

The Francophonie summit comes as West Africa faces a variety of health, economic and security challenges, such as the crisis caused by the Ebola virus that has killed more than 5,000 people in the region so far.

Some of the security challenges include the spread of armed violence in several parts of the African continent, such as the events taking place in Nigeria and northern Cameroon, where the militant group Boko Haram is active.