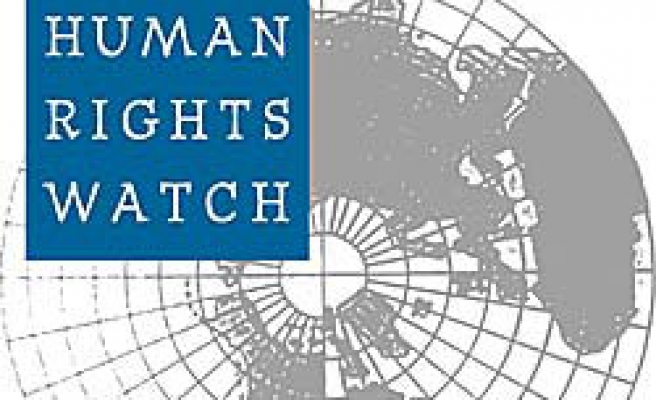 An Egyptian court decision to sentence 188 supporters of ousted President Mohammed Morsi to death is another major blow to whatever reputation for judicial independence the country once had, Human Rights Watch said in a press release issued Wednesday.

"Instead of weighing the evidence against each person, judges are convicting defendants en masse without regard for fair trial standards," said Sarah Leah Whitson, Middle East & North Africa director for the New York-based rights group.

An Egyptian court on Tuesday handed out death sentences against 188 defendants – most of whom are supporters of the banned Muslim Brotherhood – over their alleged involvement in the storming of a police station in Kerdasa town and the death of 11 policemen.

The August attack came shortly after security forces violently dispersed two major sit-ins staged by Morsi supporters in Cairo, during which hundreds of protesters were killed.

“Clearly, serious crimes were committed during the Kerdasa attack and those responsible should be given a fair trial,” Whitson said. “But it isn’t right or fair to try everyone in mass proceedings. And no trial that’s so blatantly unjust should send someone to the gallows.”

The human rights group also said that The International Covenant on Civil and Political Rights, to which Egypt is a party, limits the circumstances in which a country can impose death sentences.

"Human Rights Watch opposes the death penalty in all circumstances as an inherently cruel and inhumane punishment," read the statement.

On March 24, an Egyptian court sentenced more than 500 Morsi supporters to death on charges of attacking police stations in Minya governorate, south of Cairo, and alleged involvement in other acts of violence.

"Mass death sentences are fast losing Egypt’s judiciary whatever reputation for independence it once had," Whitson said.

Morsi, Egypt's first freely democratically elected president, was ousted by the army in July 2013 – and later imprisoned on a raft of criminal charges – following massive demonstrations against his rule.