ICC to rule on bid to throw out Kenya Ruto case

ICC judges are expected to rule on ‘no case to answer’ motion filed by Ruto’s on Tuesday, April 5 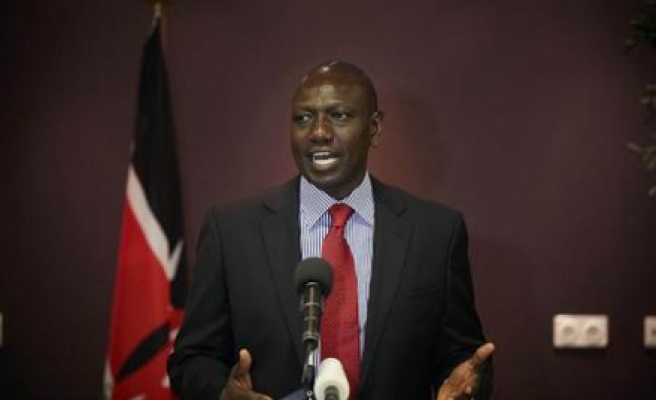 Deputy Kenyan President William Ruto was to learn later Tuesday if war crimes judges will throw out a case against him for his role in post-election bloodshed which left some 1,300 people dead.

The judges at the International Criminal Court (ICC) were to file a written decision in a bid by Ruto and his co-accused radio boss Joshua arap Sang to have charges dropped.

Ruto, 49, and Sang, 40, have both denied three charges of crimes against humanity -- namely murder, forcible deportation and persecution -- arising out of Kenya's disputed elections in late December 2007 and their violent aftermath in early 2008.

Prosecutors say more than 1,300 people died and some 600,000 others were left homeless in Kenya's worst wave of violence since independence from Britain in 1963.

The case is being keenly watched in Kenya, which has led a high-profile campaign against the ICC among African nations, accusing the tribunal of bias against the continent.

Several African nations have threatened to walk out of the court, set up in 2002 to try to the world's worst crimes.

The Kenyan government has long argued the charges should be dismissed following a similar case against Ruto's erstwhile bitter rival and now Kenyan President Uhuru Kenyatta.

In a major setback for the ICC, prosecutor Fatou Bensouda abandoned the case against Kenyatta in late 2014.

The prosecution closed its arguments in Ruto's main trial in September 2015, and the defence has yet to start.

Instead Ruto's defence team filed an unusual separate motion calling for the charges to be dismissed, arguing the ICC prosecutors had failed to prove his role in the convulsion of post-polls violence.

Sang's team has also maintained in their motion filed in 2015 that there is "no case to answer."

Defence lawyers told the court in January that the case was "in tatters."

Ruto's lawyers have argued there was no proof he was behind the bloodshed that rocked the powerful east African nation once seen as a regional beacon of stability.

In an early victory for the two men, judges barred the prosecution in February from applying amended ICC rules and using recanted testimonies in their case.

Several witnesses have changed their stories, which the prosecutors have alleged is due to intimidation and bribery. And the prosecution had maintained the recanted testimonies were key evidence in their case.

A decision on Tuesday to throw out the case would be a heavy blow for the ICC, especially after the charges were dropped against Kenyatta.

It is unclear what the judges will decide in their written ruling late Tuesday. They could dismiss the charges, or rule in the prosecution's favour.

But court officials have told AFP both the prosecution and the defence would have the right to appeal.

Violence broke out in late 2007 after Kenyan opposition chief Raila Odinga from the Luo ethnic group accused then president Mwai Kibaki, a Kikuyu, of rigging his way to re-election.

What began as political riots quickly turned into ethnic killings of the Kikuyu people, who in turn launched reprisal attacks.

Ruto was accused of holding meetings of his Kalenjin tribe in his Rift Valley home to allegedly plan attacks on Kenyatta's Kikuyu tribe.