U.N. experts, charged with monitoring compliance with a sanctions regime including an arms embargo, said diamonds are being exported from Ivory Coast in breach of the ban 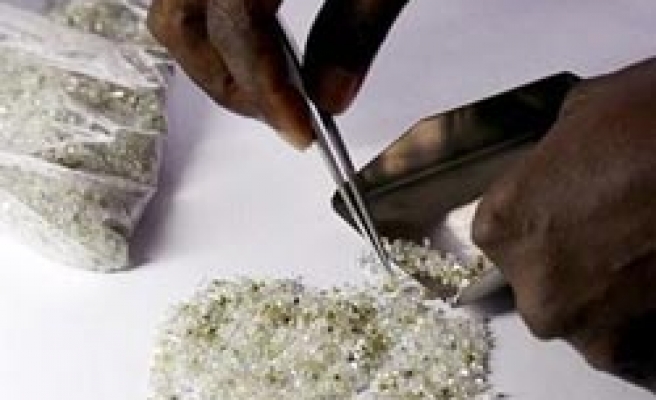 A senior Ivory Coast army officer is breaking a diamond embargo and may be using profits to buy arms, U.N. experts have found, dealing a potentially embarrassing blow to government efforts to have the ban lifted.

Ivory Coast is the only country in the world still subject to a U.N.-imposed ban on diamond exports but it received a clean bill of health in November from the Kimberley Process - the body tasked with preventing the sale of so called "blood diamonds" from fuelling armed conflicts.

The West African country, emerging from a decade-long crisis that culminated in a brief 2011 war, is pressing the U.N. Security Council to end the embargo, which was put in place nine years ago in the wake of an initial 2002-2003 civil war.

But U.N. experts, charged with monitoring compliance with a sanctions regime including an arms embargo, said diamonds are being exported from Ivory Coast in breach of the ban.

"The measures and restrictions imposed by the (Security) Council ... still do not prevent the illicit trafficking of Ivorian rough diamonds," read the report released on Tuesday.

An Ivorian government spokesman declined to comment, saying he was unaware of the content of the report.

The group identified the principal diamond buyer in Seguela - one of the country's two main diamond mining areas - as a Malian national named Sekou Niangadou.

Niangadou described to the U.N. experts how he circumvented the Kimberley Process -- an international certification scheme created by governments, civil society groups and the diamond industry -- by sending rough diamonds to offices in Guinea and Liberia to obtain certificates of origin there.

A previous report by the experts published in October estimated the annual value of the country's illicit diamond trade to be between $12 million and $23 million.

Wattao was a senior commander in the New Forces, which launched a rebellion in 2002 and backed President Alassane Ouattara during the 2011 war sparked by incumbent leader Laurent Gbagbo's refusal to accept defeat in a run-off election.

Gbagbo was captured by the French and U.N.-backed rebels and is awaiting trial before the International Criminal Court for crimes against humanity.

The group said there was "strong evidence" indicating money from diamond trafficking was being used to support elements within the army loyal to Wattao.

"The Group is concerned that the funds may be used for the purchase of arms and related materiel in violation of the sanctions regime," it said.

A communications officer for Wattao said the colonel declined to comment on the allegations.

Before the embargo, Ivory Coast produced about 300,000 carats of diamond a year, worth around $25 million, according to industry experts. Ivorian authorities have said they would like to relaunch the sector to fund post-war reconstruction.

Blood diamonds were thrust into the global spotlight in the 1990s during a succession of African conflicts where their trade financed arms purchases and resulted in human rights abuses.

At the height of wars in Sierra Leone and Angola, about a fifth of all rough stones worldwide were believed to be conflict diamonds.