IGAD leaders signed the protocol that stresses the need for both sides to iron out major sticking points – on the economic, political and security fronts – within 45 days. 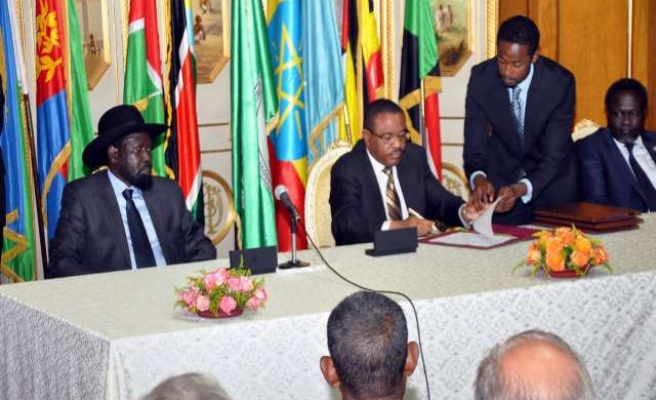 Chief mediator of the Inter-Governmental Authority on Development (IGAD) for South Sudan peace talks Seyoum Mesfin has called on the country's warring parties to respect an agreement they signed last week in Addis Ababa.

In a press briefing in Addis Ababa, Mesfin said that all parties to the conflict are obliged to fully respect the Cessation of Hostilities (CoH) Agreement signed last Sunday under the sponsorship of the IGAD.

Mesfin's statements came after Lul Ruai Kuang, the military spokesman for the country's rebels, told Anadolu Agency that his group has not signed a new "matrix" agreement, but rather a rededication to the January 23 cessation-of –hostilities agreement.

Asked by Anadolu Agency to comment on the claim, Mesfin reaffirmed: “They have signed it.”

“This can’t serve them as a pretext. Let me be very clear. It will be like shooting in the foot. The rededication has no other document except the matrix – that is what they have signed,” he added.

“Having signed the matrix, if they come days later and say they haven’t signed it, it is just a gimmick exercise.”

The IGAD, an East Africa regional bloc that has been actively mediating the peace talks, had already congratulated the warring rivals on signing the blueprint, which touches on security, social and economic arrangements as well as political and constitutional issues on the ground.

The IGAD mediators hope the deal would pave the way for a permanent peace deal between the country's warring rivals.

Mesfin said the implementation of the matrix is "all about ending the unacceptable war, saving lives and creating conducive atmosphere for negotiations."

“I advise [the rebel camp]…to play critical role in the resolution of the crisis which has put the lives of millions of South Sudanese at risk,” he said.

He also warned against any attempt to abort peace efforts and impede humanitarian efforts.

“Any violations will be met by robust and decisive action by IGAD, which will take all measures in its power to prevent the humanitarian crisis from deepening.”

He also admitted the rebel camp has "grievances" on three articles of the  'Protocol Principle of Negotiations' signed by the IGAD leaders on the sidelines of their summit in Addis Ababa on Monday.

At the end of their two-day summit, IGAD leaders signed the protocol that stresses the need for both sides to iron out major sticking points – on the economic, political and security fronts – within 45 days.

The protocol also states that failure by the warring parties to implement an earlier cessation-of-hostilities agreement would result in sanctions.

“These differences will be addressed in the upcoming six negotiations,” Mesfin added.

South Sudan has been shaken by violence since last December, when President Salva Kiir accused Riek Machar, his sacked vice-president, of plotting to overthrow his regime.

In recent months, the warring camps have held on-again, off-again peace talks in Addis Ababa under the auspices of the Djibouti-based IGAD.

The IGAD mediators described the Cessation of Hostilities matrix as the last hope to a durable peace and threatened sanctions against any violator.