This is the second recording of Morsi and his lawyer to be released by the newspaper on its website. 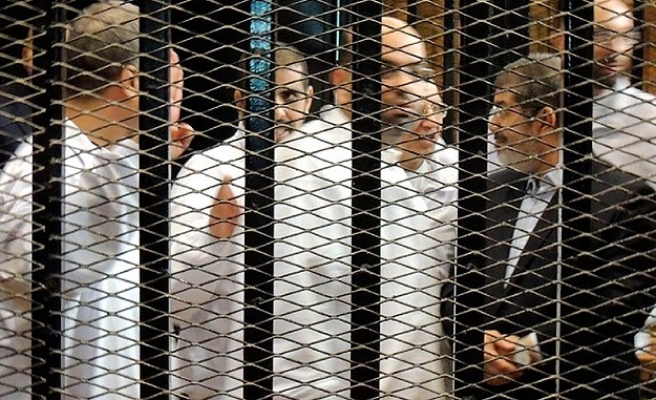 "Those who stage a military coup are always the subject of a later military coup themselves," Morsi said in a recorded conversation that the Arabic language daily Al-Watan claims to have happened between him and his lawyer Mohamed Selim al-Awa last Tuesday.

"Cannot you remember?" Morsi asked in the conversation, which Al-Watan said, took place during the Tuesday session of the ex-president's trial on charges of inciting the killing of demonstrators outside the presidential palace in late 2012. He was referring to the fact that Al-Sisi, whom he appointed as the Defense Minister himself, was the driving force of his ouster a few months later.

The newspaper has uploaded part of the audio recording on its website on Sunday.

In the same conversation, al-Awa purportedly tells the ousted president that unrelenting demonstrations by his backers are "unproductive". He even tells the former leader that he is worried about Egypt's future.

"People must sit together and talk to find a way out," al-Awa said.

"There is no hope on both sides," Morsi replied to his lawyer, without elaborating.

This is the second recording of Morsi and his lawyer to be released by the newspaper on its website. In the first recording, which was uploaded on Saturday, Morsi tells al-Awa that he does not recognize his trial's procedures.

In the second recording, which was uploaded on Sunday, Morsi asks al-Awa about Egypt's conditions.

Al-Awa purportedly replies by saying that everything is "ok" and that Egyptians are busy preparing for the presidential elections, whose date has not been decided yet.

"Why did he promote himself to field marshal now?" Morsi allegedly asked about al-Sisi who was recently given the title, the highest rank in the army, by Interim President Adly Mansour.

"Does he really want to be president?" Morsi asked again. "Will he leave the army?"

"He will be [the president]," the lawyer replied.

The recording has stirred the anger of the lawyers representing other defendants in the case, with the spokesperson of the Muslim Brotherhood defense team Mohamed al-Damati calling for an investigation into how the conversation was recorded and leaked.

Al-Damati said recording the conversations of people without the presence of a legal permission from the prosecution was against the law.

Sources with the team, however, said they received information that one of the officers assigned to guard the ousted president during his trial made the recording as Morsi and his lawyer conferred in a court room ahead of his trial last Tuesday.