At a center for internally-displaced persons in Lankien, people are struggling. 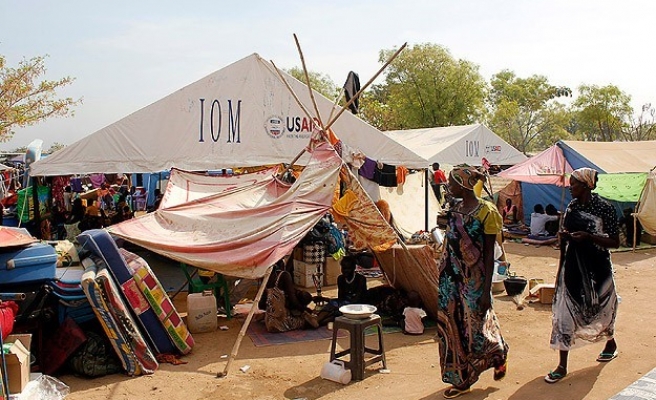 Life in Lankien, a rebel-held town in Nyirol County in South Sudan's Jonglei State, is difficult, with meager food supplies and medical services.

But for many members of the Nuer tribe, it has become a safe haven in a country at war along political and, some say, ethnic lines.

Bol Kuon was shot in the leg in capital Juba at the outset of the current conflict before finding his way to Lankien, where he is currently nursing his wound at the town's only clinic.

"I was in Juba for three years. Then in January, I ran from Juba to Nyirol, and later to Lankien," he told The Anadolu Agency. "I don't receive food, but I am happy here with the little I get."

South Sudan, which became independent in 2011 after seceding from Sudan, descended into chaos and bloodshed late last year after President Salva Kiir accused his sacked vice-president, Riek Machar, of attempting to carry out a coup against his regime.

Jonglei State is a stronghold of the Nuer tribe.

Nearly 27,000 people of the Nuer tribe – from which Machar hails – have been displaced in the area, which remains difficult to access for those bringing aid and other services.

People displaced from the town have settled down in either other communities or with relatives.

Kuon plans to remain in Lankien if his security cannot be guaranteed elsewhere.

"Even if I get shot, I will die for a reason," he said. "This is my area. I don't receive food, but I am happy here with the little I get."

At a center for internally-displaced persons in Lankien, people are struggling.

"Life here is very difficult," Peter Kuot, an internally-displaced person, told AA. "We are always in the camp and even food is not enough."

Like Kuon, Kuot prefers to stay in Lankien despite the relative dearth of food.

There is a school building and a small clinic in the area, but they offer no services.

According to a factsheet issued by UNOCHA, most people in Lankien and other counties in South Sudan's northern belt – who remain dependent on food deliveries through airdrops – now face a crisis in food security.

Malnutrition is on the rise, while access to safe water also remains a challenge.

People in the area use river water for drinking, cooking and washing, further increasing the risks to their health.

"Internally-displaced people are arriving here daily from the surrounding areas for fear of their lives from the government," Jock told AA.

"Our main challenge is getting food to them. As you can see, the roads are bad and the only way things can reach people here is by plane," he added.

"When the planes come and drop food, the people get something to eat. But sometimes this takes a long time," he noted.

"I came to see the situation of the people and how humanitarian assistance was going on. I have noticed that there is a problem," Kang said during a visit to the area.

"We will do what we can to see that the situation is addressed," she added. "But the most important thing is that humanitarian aid access should be made available, so that our aid workers can reach you people."