If it reaches Ivory Coast, the powerhouse of French-speaking West Africa, the economic consequences could be yet worse 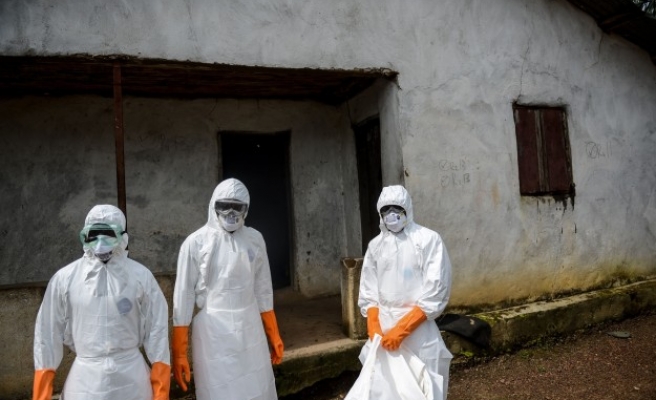 The billboard depicts a masked health worker in a biohazard suit looming over a bed-ridden patient. Above them, bright red letters warn commuters on a busy Abidjan street that "The Ebola risk is always there".

As Ivory Coast campaigns to fend off an Ebola outbreak ravaging neighbouring West African states, such grim reminders of the catastrophe unfolding across its western border are everywhere.

The worst recorded outbreak of the virus has killed over 2,400 people in Liberia, Sierra Leone and Guinea, wreaking havoc on their fragile economies, and has also spread to Nigeria and Senegal.

If it reaches Ivory Coast, the powerhouse of French-speaking West Africa, the economic consequences could be yet worse. The country of 20 million people exports 40 percent of the world's cocoa, the raw material for chocolate, and supplies its landlocked neighbours with everything from rice to fuel.

Ivory Coast is taking the kind of aggressive anti-infection measures that its poorer, smaller western neighbours were slow to adopt. Hand washing stations have appeared at the entrances of government buildings and office towers in Abidjan, the bustling economic capital. People have abandoned the traditional three-kiss greeting.

Mass mobile text messages send out a government awareness campaign nationwide. And children, exposed to the information drive on radio and television, quarantine their classmates in a playground game they call "Ebola".

"It's without precedent," said Daouda Coulibaly, the epidemiologist charged with leading the effort. "We started back in March to explain to people that this is a real disease. It must be taken seriously."

The World Health Organization (WHO) has already warned that several neighbouring countries are at risk. With the outbreak gathering pace, the WHO has said a $1 billion international response will be needed to keep the number of those infected within the "tens of thousands".

Coulibaly is working seven days a week to ensure that none of them is Ivorian, and the government has imposed draconian measures at its borders. Flights to and from Guinea, Sierra Leone and Liberia have been banned - provoking anger in those countries - and last month the western border was shut.

Dozens of people have been tested for the disease. The army is now patrolling the area and those caught crossing into Ivory Coast illicitly face an automatic 21-day quarantine.

A man hunting bush rats in violation of a government ban on bush meat, thought to be one way in which Ebola is transmitted, was condemned to five years in prison last month.

But experts warn that Ivory Coast may struggle to insulate itself completely due to its long, porous borders with both Guinea and Liberia - the country worst hit by the disease.

"The epidemic, particularly in Sierra Leone and Liberia, is outpacing our attempts to control it," said Marc Poncin, head of emergency response for medical charity Medecins Sans Frontieres in Guinea. "Ivory Coast is the country most at risk. It's probably a question of time before it appears in Ivory Coast."

Little over three years after a civil war, the Ivorian economy is bouncing back. Growth hit 9.8 percent last year and investors' interest is booming.

A $750 million Eurobond issued in July attracted $4.75 billion worth of orders, and the government has said it will tap international debt markets again next year.

President Alassane Ouattara, who emerged victorious from the 2011 conflict largely thanks to military backing from France, is up for reelection next year. He is campaigning as the architect of an Ivorian renaissance but Ebola could jeopardise that.

"We're worried by Ebola in neighbouring countries that are our economic and commercial partners," Ouattara said on Wednesday, in his first direct comments on the outbreak. "We're working to ensure that we maintain our strong rate of growth."

For Ronak Gopaldas, head of country risk analysis at South Africa's Rand Merchant Bank, the government knows its record is on the line: "Ebola risks puncturing all the good work that's been done and I think that's why they've been so proactive."

While economists assess Ebola's impact, it is clear that an economic calamity is brewing across Ivory Coast's borders. Economic growth in Liberia and Sierra Leone could drop by almost 3.5 percentage points, according to the International Monetary Fund, as Ebola cripples agriculture and services.

Prices there have rocketed as worried citizens rush to stock up on provisions and border closures disrupt imports.

Ivory Coast would face the same problems were Ebola to jump the border. But, with an economy that makes up 40 percent of the eight-nation CFA franc bloc, the repercussions would be regional, including higher inflation.

"We're already affected economically speaking because of the perception," Trade Minister Jean-Louis Billon told Reuters. "Those who are frightened are more those who know less about Africa and are coming to discover."

Though the country has yet to register a single case, at least two international conferences due to take place in Ivory Coast have been cancelled. International cocoa exporters have restricted staff movements in the country, exposing the sector's vulnerability to the growing fear of Ebola.

"The more you go to the perception that things are getting out of control, the more you will have this psychological effect," said Alain Feler, IMF representative in Ivory Coast.

Citizens of Abidjan are wary. On packed public buses, people try to avoid touching. "It's often difficult because you can't avoid human contact," said student Cesar Kouame Kouakou. "But we try to do it because no-one knows what causes this sickness."

Ivorian authorities are heartened by events in Senegal and Nigeria, where relatively rapid government responses appear to have contained outbreaks.

After an initially slow start, hundreds of millions of dollars in international financial assistance are also beginning to pour into Guinea, Liberia and Sierra Leone to fund the Ebola fight and offset the economic damage.

President Barack Obama has announced that the United States plans to send 3,000 troops to the region.

For Coulibaly, the growing momentum is a positive step, but he worries that nations on the frontline are still being neglected. "The neighbouring countries must be assisted financially, logistically, with material resources," he said. "We need to see that assistance now."