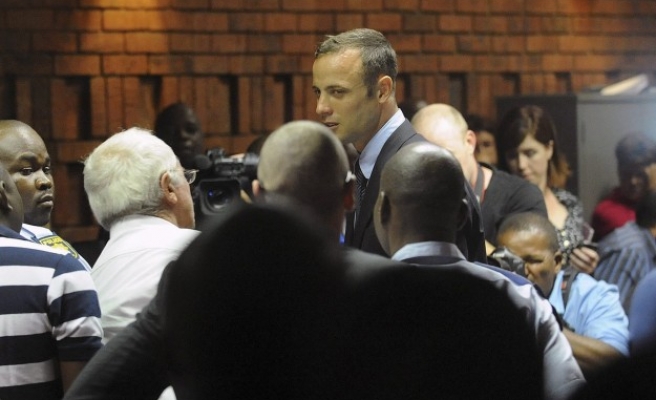 The judge in the murder trial of South African track star Oscar Pistorius warned the media to behave on Tuesday after a local television station leaked a photo of the state's first witness, who had asked that her image not be broadcast.

The warning was one several dramatic moments in the trial's second day that saw a distraught Pistorius bury his head in his hands when the court heard details from the post mortem of his slain girlfriend, Reeva Steenkamp.

Olympic and Paralympic star Pistorius is on trial for murdering Steenkamp at his suburban Pretoria home on Valentine's Day last year. He says he mistook her for an intruder.

The trial, which could see one of global sports' most admired figures jailed for life, has drawn comparisons with the high-profile murder trial of American football star and actor O.J. Simpson two decades ago.

Judge Thokozile Masipa warned the media and ordered an investigation after broadcaster eNCA showed a photo of Pistorius' neighbour Michelle Burger during the audio broadcast of her second day of emotional testimony.

While the trial is being televised live, a previous court order had ruled witnesses must give their consent to be filmed.

Burger, a university lecturer who testified on Monday that she heard "bloodcurdling" screams from a woman followed by gun shots, had not consented to being filmed and only the audio of her testimony was being broadcast.

The station accompanied the audio feed of her testimony on Tuesday with a picture of her. After prosecutor Gerrie Nel pointed out the leak, Masipa called for a brief adjournment.

"I am warning the media, if you do not behave, you are not going to be treated with soft gloves by this court," Masipa, herself a former journalist, said when the court resumed.

The station's head of news apologised, saying in a statement it was a "bad judgement call" to use the photo.

Burger broke down in tears toward the end of her testimony, following an angry exchange with lead defence attorney Barry Roux, who had sought to show she had mistaken the screams of agitated Pistorius for that of a woman.

Pistorius himself appeared emotional when the court heard details of the bullets hitting Steenkamp and the removal of bullet fragments from her head during the post mortem.

He leaned forward, burying his head in his hands and later appeared to wipe tears away from his eyes. Unlike his bail hearing last year, the track star has been relatively composed during the trial.

The court also heard from a second witness, neighbour Estelle van der Merwe, who testified that she heard what sounded like an argument early on the morning Steenkamp was killed.

"From where I was sitting it seemed like two people were having an argument but I couldn't hear the other person's voice," she said through an Afrikaans language interpreter.

Masipa has also restricted the media from publishing photos of witnesses who have not consented to be filmed.

A separate South African court ruled last month that the trial should be televised, saying it was vital for impoverished South Africans who feel ill-treated by the justice system to get a first-hand look at the proceedings.